Terminal recovered from rebel hands is expected to be reopened for renewed exports next week.

A Libyan crude oil terminal recovered from rebel hands is expected to be reopened for renewed exports next week, Al Jazeera has learned.

The Al-Hariga terminal has a daily capacity of 110,000 barrels.

The army announced on Wednesday it had taken control of Al-Hariga and Zueitina ports under a deal to end a crippling nine-month blockade by rebels seeking autonomy in the country’s east, reported the AFP news agency.

Renewed oil exports is set to restore a much-needed revenue stream for the weak central government following the 2011 overthrow of Muammar Gaddafi.

The rebels’ seizure of four eastern oil terminals last July in pursuit of their campaign for restored autonomy for the eastern Cyrenaica region slashed output from 1.5m barrels per day (bpd) to just 250,000.

Tripoli says the blockade has cost the country more than $14bn in lost revenues.

Under the deal reached on Sunday, the rebels were to hand over the two terminals this week and cede the other two within two to four weeks, provided negotiations are successfully concluded.

The national oil company declared the four terminals inoperable in August, clearing it of liability for failure to honour contracts and bringing all oil exports to a halt.

The recovery of Ras Lanouf and Al-Sidra will be an even bigger prize, as they have a combined capacity of 550,000 bpd. Western governments issued a joint statement on Monday calling for a rapid reopening of the oil terminals.

They called for “the prompt establishment of a transparent and inclusive national dialogue that includes particular focus on the fundamental national and regional questions involving Libya’s resources”.

Details of Sunday’s agreement have been kept under wraps.

But the rebels have been demanding a referendum on restoring the autonomy that the Cyrenaica region enjoyed for the first 12 years after Libyan independence in 1951.

They have also sought full back-pay for their men, who were employed as security guards at the oil terminals before launching their blockade.

The US Navy intercepted the tanker and returned it to Libya, and the UN Security Council passed a resolution banning all unauthorised Libyan oil exports. 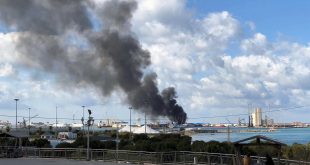