الرئيسية / Normal / 'Everything is smuggled in Libya'

'Everything is smuggled in Libya'

The lack of security in Libya has led to a surge in the smuggling of contraband, arms and illegal immigrants.

Jaghbub is one of Libya’s weakest border points.

Magharebia sat down with the chairman of the town’s Supreme Security Committee, Ali Hashem al-Zway, to find out what can be done to fix the crisis.

Magharebia: What were the conditions of your work with the Supreme Security Committee in Jaghbub to secure the border with Egypt?

Ali Hashem Al-Zway: We started working with just one rifle. We set up a checkpoint there, and we ran patrols. We managed to thwart several operations, and we were fired at by smugglers three or four times.

Magharebia: Did the state support you with arms and supplies?

Al-Zway: No, nothing, except for three vehicles that we received from the Supreme Security Committee in Tobruk, which we report to. We could do the job, but we didn’t have the necessary capabilities.

When we ran patrols, smugglers would attack us with Kalashnikovs and RPGs. Magharebia: How about the Jaghbub local council, did they contribute to the committee’s efforts?

Al-Zway: The council didn’t co-operate with us at all.

No entity co-operated with us except for the Supreme Security Committee in Tobruk, but within its own capabilities. Most of the patrols were run with the support of personnel and vehicles from that committee.

Magharebia: Did you arrest any smugglers? What were their nationalities?

Al-Zway: We arrested several groups from Libya, Egypt, Sudan, Bangladesh and Pakistan who were smuggled into Libya as illegal immigrants by Libyan drivers.

The smugglers we used to catch in the act and hand over to the authorities were later released, together with their vehicles, and they would resume their activities. This made us lose enthusiasm for work for which we faced troubles and dangers.

Magharebia: Can you tell us about the items being smuggled to and from Libya?

Al-Zway: The narcotic Tramadol pills, bags of expired chicken liver and medications are smuggled to be sold to Libyan consumers. Everything that you can imagine is smuggled to Libya.

Magharebia: What about the proliferated arms in Libya, are they smuggled across the border?

Al-Zway: We know that arms are smuggled outside Libya through the border strip, but at places beyond the areas our patrols were moving at. Combating such activities needs capabilities that we didn’t have, and therefore, we didn’t go for such a confrontation.

Magharebia: What is the condition of the border now that the Supreme Security Committee has been disbanded? Who secures Libyan crossings?

Al-Zway: Our work now is restricted to doing some administrative procedures and receiving the salaries of former committee members. There is no entity monitoring the border now.

There is no alternative for securing the border now that the security committee has been disbanded.

Even the army personnel who come to secure the border stay here for two or three days and then leave, and we don’t know why. It seems as if there is no state. 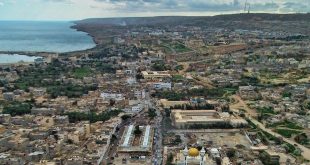