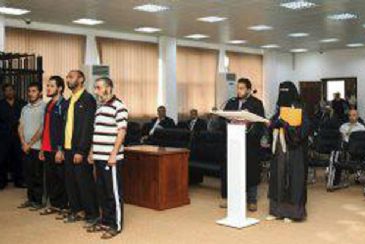 Photo: The defendants, helped by two lawyers, facing Charges at
Zawiyah court
Five defendants appeared in the dock in the brand new courtroom
in the Libyan city of Zawiyah on Tuesday in what court officials
said was the first civil trial of suspected supporters of former
dictator Muammar Gaddafi.
At the request of defence lawyers, Judge Amer al-Turki adjourned
the trial for a week without reading out any charges.
However, a court official, Ali al-Shaab Mohammed said the five
were accused of “forming a criminal gang with the aim of carrying
out acts of sabotage and of possessing unlicensed weapons.”
They were all detained in Zawiyah, 40 kilometres west of Tripoli,
during last year’s uprising that toppled Gaddafi from power after
more than four decades of dictatorial rule.
Two lawyers appeared for the defence, one of them a woman
wearing the full niqab veil.
In early February, a first group of alleged Gaddafi loyalists went
on trial before a military court in Libya’s second-largest city
Benghazi, but Mohammed said the Zawiyah hearing was the first
before a civil court.
The Benghazi court later ruled itself incompetent to hear a case
against civilian defendants and referred it to a civil court.
Several former top officials of Gaddafi’s regime and hundreds of
his supporters, both soldiers and civilians, have been held for
months, many of them in prisons run by former militias that are
reportedly outside government control.
The government said it has in recent weeks taken control of
several militia prisons and moved to get the courts back up and running.