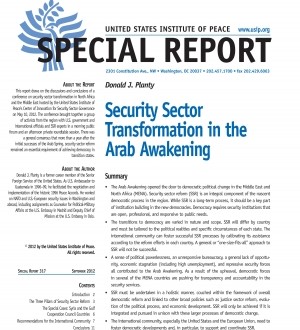 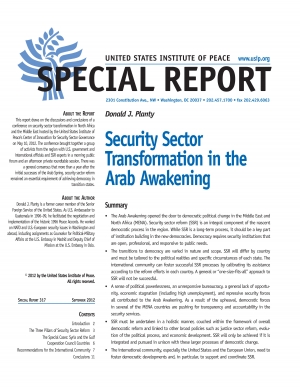 Countries transitioning to democracy must change old models of organizing the police, armed services, and intelligence services, which typically were characterized by mistreatment of the public, for models that stress transparency, accountability, and citizen involvement. Yet each new government in the Middle East and North Africa must tailor its reforms carefully and patiently in order to avoid backlash among security services.

This report draws on the discussions and conclusions of a conference on security sector transformation in North Africa and the Middle East hosted by the United States Institute of Peace’s Center of Innovation for Security Sector Governance on May 10, 2012. The conference brought together a group of activists from the region with U.S. government and international officials and SSR experts in a morning public forum and an afternoon private roundtable session. There was a general consensus that more than a year after the initial successes of the Arab Spring, security sector reform remained an essential requirement of achieving democracy in transition states.

Donald J. Planty is a former career member of the Senior Foreign Service of the United States. As U.S. Ambassador to Guatemala in 1996–99, he facilitated the negotiation and implementation of the historic 1996 Peace Accords. He worked on NATO and U.S.-European security issues in Washington and abroad, including assignments as Counselor for Political-Military Affairs at the U.S. Embassy in Madrid and Deputy Chief of Mission at the U.S. Embassy in Oslo.

This report was originally published here.