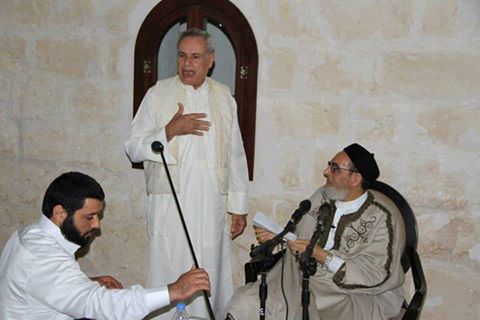 Threats of clashes between Tajoura and Misrata subsided today after three Tajoura men seized by Misratan brigadesmen were released and the brigade agreed to quit its Tajoura base. A number of Misratan truck drivers, seized by Tajoura in reprisal for the abduction were also released.

The agreement followed intense mediation in Tajourna by a top-level Government and Congress delegation. The seriousness of the situation was evidenced by the fact that it included the Defence Minister Mohamed Barghathi, Chief of Staff Yousef Mangoush, the acting President of Congress Juma Ateega, himself from Misrata, and the Deputy President, Saleh Al-Makhzoum.  Also involved were other Congress members from the two towns, Abdurrahaman Sewehli and Salahadeen Badi from Misrata and Mohamed Sasi and Mahmoud Ghariani from Tajoura, as well as local elders and members of the respective town and military councils.

Tensions had been growing in Tajoura after locals demanded that the Al-Marsa Al-Kubra brigade from Misrata quit the Rahbat Al-Durua camp in the town. They accused brigade members of behaving badly towards local people.

The three men seized by the brigade and sent to Misrata were said to be members of a group planning a demonstration at the camp today which was intended to force the Misratans out.

Their seizure resulted in a delegation from Misrata heading to Tajoura earlier yesterday to try and resolve the situation. However, talks were inconclusive. As a result, it was reported that Tajoura revolutionaries had threatened to attack Misrata.  Tajoura Local Council and its Military Council moved to rein in the revolutionaries but locals reconfirmed the plan for the demonstration today. It would be peaceful, they said, but insisted the Misratans would be forced out.

With the threat of violence mounting, the authorities brought in the big guns to diffuse the situation.

The Misratans quit the base today following the agreement.

The site is owned by the Ministry of Sports and Youth. It is where it plans to build a 60,000-seat international football stadium for the 2017 Africa Cup which Libya is to host.

Later, addressing worshippers at Tajoura’s Murad Agha Mosque before Friday prayers, Barghathi said that the site had  ben handed over to the Sports Ministry and that his ministry would surrender all camps in Tajoura if needed by the local council for projects. Members of the local council as did the Grand Mufti, Sheikh Sadek Al-Ghariani.