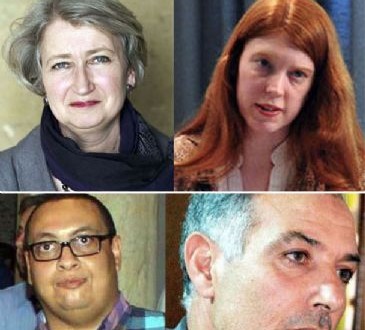 Top (from left): Lindsey Hilsum and Heather Blake who formed part of the panel of the discussion in London and above: (from left): Libyan journalists Radwan Gharyani (who was killed), and Taher al-Turki, he was injured when gunmen fired at his car
The experiences of Libya were highlighted during a panel discussion organised by the Council for the Advancement of Arab British Understanding in London and the MBI Al Jaber Foundation on press and journalism in the Arab world: Three years on: the challenges of covering the Arab uprisings.

The event coincided with the opening of the MBI Al Jaber Media Institute, the first privately funded organisation for the training of journalists in Sana’a, Yemen.

Lindsey Hilsum who spent most of 2011 in Libya and wrote a book Sandstorm: Libya in the time of revolution recalled it was hard not to get caught up in the excitement of the country. It is chaotic now. Reflecting on the French revolution, Hilsum emphasised that you cannot expect to go from dictatorship to democracy overnight.

She noted that before the toppling of Gaddafi Libya only had state media*: people jumping up and down and shouting ‘with my blood and my spirit I redeem Gaddafi.’ There was nothing. Most Libyans do not use the social media. They use facebook and they talk among themselves. They do not really trust any kind of traditional media.

The media in Libya is in flux. There are numerous media outlets and this just reflects Libya. It is completely chaotic.

It is very hard for Libyans to get any kind of reliable information about what is going on and the main danger for Libyan journalists and for the Libyan people, is to be caught in the wrong place at the wrong time or to stand up against the militia. In Benghazi there have been journalists who stood up against the militia and you have to be extremely brave to do that.

Hilsum praised two Libyan female television journalists working for a new TV station. They were aged 21 and 26. “One of them told me she was probably the only female TV reporter in the country. She was going out there when things happened. People were telling her she should not be there and she should cover her head but she was just working, pretty much alone.”

Hilsum is working on a network to support women journalists in the Arab world who can feel extremely isolated and need support and help from outside.

During the uprisings state television showed very little information on the conflict taking place. Most of the information came from citizen journalists uploading videos onto u-tube and face book and what was being documented on blog sites.

Reporters Without Borders condemned the murder of Radwan Gharyani, 44, the owner and manager of radio Tripoli FM whose body was found on December 1st in the east Tripoli suburb of Ghut Roman. He had been shot four times. There is so far no indication as to the identity and motives of those behind Gharyani’s death.

Reporters Without Borders called on the Libyan authorities to investigate this murder without delay in order to establish the motives and identity of those responsible, who must be brought to justice.

Given the current climate of violence against news providers, it is important that the investigators do not rule out the possibility that the murder was linked to the victim’s journalistic work. More than two years after the revolution that toppled Gaddafi’s authoritarian regime, the situation in Libya is still highly charged and unstable, and journalists continue to be exposed to a constant threat of violence in the course of their work.

Reporters Without Borders reminded the Libyan government of its national and international obligations as regards respect for fundamental freedoms.

After the United Nations General Assembly passed its first-ever resolution on the safety of journalists, RWB urged the Libyan authorities to take all necessary measures to guarantee the protection of journalists working in Libya and to end the prevailing impunity.

The UN Special rapporteur has said that media professionals are human rights defenders. They bring the raw reality of what is taking place in conflict zones to the global forefront and it is from this awareness that justice can be served when crimes and violations take place in conflict and non-conflict zones.

Attacks on Libyan journalists documented by Reporters Without Borders

In one of the most recent cases, shots were repeatedly fired atRadio Zawiya, a radio station based in the northwestern city of Zawiya, at around 8 a.m. on 29 September, damaging the office of its manager, Amar Sultan, but causing no injuries.

Taher al-Turki, the editor of Al-Rawasi, a newspaper based in the northwestern city of Zintan, was driving with his wife, daughter and brother from Swani to Zintan on September 27 when gunmen fired at his car, injuring him in the leg, and then kidnapped him. His brother, who sustained gunshot injuries, died after being taken to hospital. The family has received no news of Turki since the kidnapping.

Ahmed Abdel Hakim Al-Mashaoui, a young freelance journalist who works for various local and international media, was arrested in the Tripoli district of Al-Hadba on September 23 by patrolling police, apparently because the military were looking for him. He was taken handcuffed and blindfolded to a detention centre and questioned, and then released the next morning.

Hakim’s arbitrary arrest appears to have been prompted by a telephone interview he gave to the privately owned satellite TV station Al-Assima the previous evening in which he criticized Prime Minister Ali Zidan’s government, Libya’s Muslim Brotherhood and the influence of Libya’s armed militia, which he blamed for the lack of security.

During the interview, Hakim also talked about the activistAzzedin Louehshi’s abduction by an armed gang a few days before while participating in a demonstration in Tripoli’s Martyrs Square.

While detained, Hakim was put under a great deal of pressure to telephone various Libyan TV stations to retract what he had said, but he refused to do this. Since his release, he has been receiving intimidatory messages and death threats.

Mohammed Al-Hashim, a freelance journalist who works for theShuruq Libya newspaper and the Tadamoun news agency, was abducted at a military checkpoint near Martyrs Square at around 5:30 p.m. on 14 September. After being stopped at the checkpoint for an ID check and identifying himself as a journalist, he was taken to a secret prison and tortured for about 12 hours.

Hashim’s interrogators whipped him, gave him electric shocks and burned him with cigarettes in an eventually successful effort to force him to confess that he worked for the Gaddafi regime, something he categorically denies. He was released four days later, on 18 September.

Gunmen ransacked the premises of the Libya Al-Jadidanewspaper on the morning of 23 August (a Friday, and therefore a holiday in Libya), stealing equipment including several computers. Its managing editor, Faisal Amar Elhemali, and its editor in chief,Mahmoud Al-Misrati, had received many threats to themselves and their families before the attack.

*Note: The Tripoli Post was never a state media. It was, and still is, privately owned and independent. It has no affiliations with anybody.