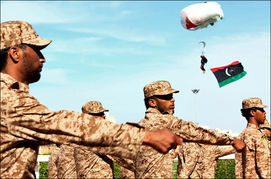 [AFP/Mahmud Turkia] Libyan soldiers show their skills as they parade during a graduation ceremony for a new batch of troops last May in Tripoli.

Libya’s interim authorities say they are making efforts to bolster the military and build a professional army.

The most important of these efforts are represented in sending batches of new conscripts, current soldiers and former fighters against Kadhafi’s forces overseas to receive military training.

“There are about 400 trainees in Turkey, and we’ll send 400 more in the coming days to Italy,” interim Prime Minister Ali Zidan said January 8th. “Turkey will take about 3,000 trainees, Britain will start with 400, to be raised to 2,000. We’ve also prepared 10 camps across the country to absorb those trainees.”

“There are currently 5,000 army trainees overseas, not to mention those recently sent to Italy, Turkey and Britain,” he added. “They include officers and non-commissioned officers, sent to Pakistan, the Gulf, Morocco, Algeria, Italy, Germany, Britain, the United States and other world countries for training.”

Libyan troops will also be sent to southern Europe to be trained by US troops as early as this summer. As many as 8,000 Libyan soldiers will take part in a 24-week training programme.

The day after Zidan’s statements, a batch of 400 officers, non-commissioned officers and soldiers from an infantry battalion departed from Mitiga airport on their way to Italy to attend a training course lasting for three or four months as part of a programme to integrate former revolutionaries and rebuild the Libyan army.

Libyans, meanwhile, are urging Tripoli authorities to quickly bolster military forces in order to put an end to the relentless bombings and assassinations.

“I have big questions about the slowness and failure to build the Libyan army, three years since liberation,” political activist Nadia Jaaoda said.

“Events taking place now, including wars, conflicts, kidnappings and assassinations, indicate that there is no security, and show indifference and lack of desire to build the army,” she told Magharebia.

There is no hope “about building a state without first building the army”, according to Jaaoda.

“Building the army must not be arbitrary, but according to a clear plan and a comprehensive strategy, specifying the number of personnel in the army to be built, and determining whether it’s going to be a defensive or offensive army,” she continued.

She backed the idea of seeking international expertise, “to have a strategic ally that can help build the army”.

“We don’t want our army to be just a soldier carrying a weapon and standing opposite a camp; rather, we want it to be a developed and educated soldier who can deal well with technology,” the political activist concluded.

Adel Elhasy is a former field commander of the Free Libyans Brigade. He disbanded the group following the GNC election in July 2012 and handed its weapons to the state. Now he recommends training those fighters in discipline, order and competency.

But according to Elhasy, groups with their own agendas, such as the “Libya Revolutionary Chamber”, have impeded the building of an army.

“All those are trying to form new entities under new names, such as the national guards, so they can have the deterrent military force in their hands,” he told Magharebia.

These groups “won’t accept a professional army with a correct doctrine, with army officers who joined the front and real revolutionaries forming its nucleus”.