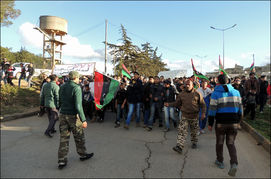 [Ali Gattani] Shahat residents joined in on the national protests against extending the congressional mandate.

Protestors converged on Tripoli’s Martyrs’ Square Friday (February 7th) to tell the General National Congress (GNC) that its time was up.

The rallies took place in an atmosphere of stable security, and protestors carried banners rejecting the extension of the GNC’s governance mandate. The demonstrators called for freezing political parties until a constitution is written and the national army and police are activated.

While many Libyans agree on the need to replace the GNC because they believe it hasn’t done what was required of it -to draft a constitution and form a permanent government – they differ in mechanisms.

Some believe it has to be replaced now, while others say it is a legitimate body and should only be toppled through the ballot box.

On Friday, Prime Minister Ali Zidan called on citizens to abide by peaceful protests and to avoid violence, sabotage and attacks on state properties. He also urged them to co-operate with policemen and show a spirit of responsibility by rallying peacefully and avoiding violence.

Interior Minister-designate and Deputy Prime Minister Sadiq Abdulkarim on Thursday night issued orders to the ministry’s security agencies not to attack or prevent any rally, to protect civilian protestors and secure the right to peaceful demonstration, freedom of expression and opinion.

Meanwhile, the Zintan local council, Shura Council and military council rejected the extension of the GNC mandate, saying its time was up.

The League of Libyan Scholars also called for not extending the GNC’s mandate and said in a statement that the congressional mandate was over and that citizens had the right to express their opinions. It demanded the government, which it said admitted to its security weakness, protect the demonstration.

For his part, GNC President Nuri Abu Sahmein on Thursday said that “the peaceful transfer of power is an achievement of the February revolution and must be preserved.”

He noted that congress drafted a roadmap, which he said was clear. He also urged citizens to stand alongside the state’s legitimate institutions and maintain the concord that has been reached.

“There is a civilised, democratic way to topple the GNC without any noise, weapons or demonstration: each city that doesn’t want to extend the GNC’s mandate can withdraw its representative from the GNC. We’ll then discover the truth and the empty seats,” commented journalist Abdul Salam Saber.

Up to 15 GNC deputies have resigned in response to protestors’ demands.

“This is a peaceful movement that we must respect. The street is divided, and this is an angry movement that rejects extension,” said Hasan al-Amin, one of the lawmakers who quit the body.

He added, “The GNC realises that the country is full of weapons, and also understands that things have now evolved to disputes, and therefore, if it has that sense of patriotism, it should refer back to the street in a referendum rather than extend its mandate unilaterally without returning to the popular base that elected it.”

“No to extension, and yes to the return of the founding fathers’ 1951 constitution without any amendments as an effective, guaranteed roadmap that would bar the road of Libya al-Ghad opportunists,” said demonstrator Mahmoud Ali.

For his part, political analyst Mohamed al-Hankari said, “As soon as the GNC received power, it shut off its ears to people’s voice and closed his eyes so it can’t see people, and today, it’s also closing roads leading to it.”

Meanwhile, Derna, which has always led the way in demonstrations and sit-ins, didn’t take to streets to demand the departure of GNC like the rest of cities.

“Treacherous hands have reached the simple, innocent, honest civilians,” said Soumia Farjani, a Derna-based journalist. She added that Derna residents “today fear treachery in the absence of security to protect their demonstrations.”

Mahasen Bashir, a teacher, said, “I’m against extending the GNC’s mandate, but I demand early elections and the transfer of power to an elected, legitimate body so democracy can survive in our country.”

“I don’t want the GNC, but what is the democratic alternative now?” wondered engineering student Mohamed Fathi.