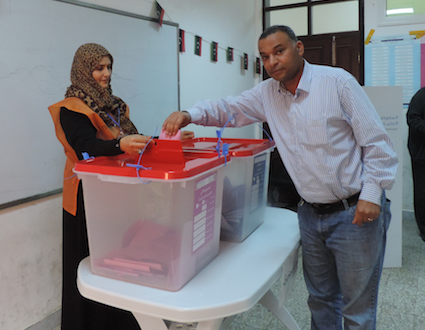 Polling stations open across the country 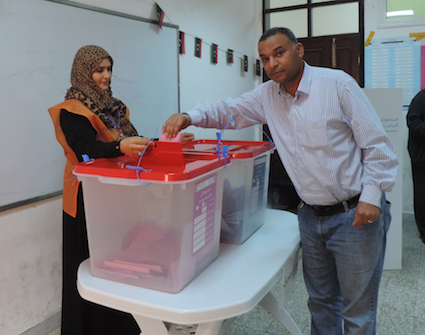 Elections centres all over Libya opened at 8 am this morning for the elections to the constitutional drafting committee. Polls will close at 7 pm this evening.

At polling station No. 14045 in Tripoli’s Ras Hassan district, a trickle of voters were making their way in and out of a small classroom that was being used as one of five polling areas to cast their ballots.  There was little queueing – two minutes at most. There were two polling sections for men, two for women and one for disabled voters.

The head of the polling station, Amal Zaik, told the Libya Herald that although traffic had been slow she expected voting to pick up the afternoon as the centre’s 1,000 resistered electors made the most of today’s national holiday.

She said materials for the polling centre had arrived at the school, where she is also a teacher, one week ago and there had been hurried preparations last night to make the centre ready for the morning.

Bashir Graghoum, a domestic elections observer, said he had visited four polling centre so far this morning and hoped to see between ten and twenty throughout the day. He said those he had been to on the Airport Road and in Abu Saleem had, like Batata, been quiet, adding that he been impressed with security at all four.

Graghoum explained that he had been a political prisoner in Abu Saleem Prison for 19 years after he joined the Libyan National Front Party in opposition to the former regime. He said he used to dream of democratic elections like these inside the prison but could never have been sure they would become a reality.

He said turnout could not be expected to be as high today as and been the case in the 2012 general election because people had become disillusioned with Congress. He said, however, that elections to the 60-member committee were still an important step forward in the evolution of the country.