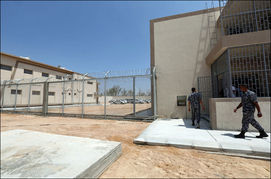 Extremist militias are undermining Libya’s efforts to improve prison conditions, the top human rights figure in the country says.According to Nasser Houari, president of the Human Rights Victims Organisation and founder of the Libyan Observatory for Human Rights, inmates face torture if they fall into the hands of these unregulated armed groups.

Magharebia met with Houari in Benghazi to hear the disturbing story of what happens to Libyan prisoners in these illegal detention centres.

Nasser Houari: Prisoners in Libya are facing very tough detention conditions. Prisons don’t meet the international standards, and the reason for that is militias’ control…

Militias have used torture as an ideal, quick way to extract confessions from prisoners, and scores have already died of torture, malnutrition and harsh treatment.

Magharebia: Can’t the government and General National Congress do anything to stop these abuses?

Houari: Some prisons were supposedly placed under the administration of the justice ministry, but actual control is by prison directors and military councils of cities where the prisons are located.

The current justice minister, Salah al-Marghani, has made many efforts and attempts, but the rejection and evasiveness of militia commanders and prison directors prevents him from doing what he wants to do.

Houari: It is very bad, as I’ve said. Many have already died, while others have suffered disabilities.

As to trials, most of them lack fair trial representation. Families of defendants can’t appoint lawyers to defend their detained relatives…

Magharebia: In your capacity as head of the Human Rights Victims Organisation, what have you seen?

Houari: Things that words can’t describe. Many of those now running these prisons were once prisoners themselves at the time of Kadhafi, and therefore, they’re settling their scores with the leaders and soldiers of the Kadhafi regime.

Any fair, brave rights activist must admit that what’s happening now at Libyan prisoners is way worse than what was happening at the time of Kadhafi.

Magharebia: How do these prisons respond to your organisation?

Houari: There is no co-operation at all. On the contrary, we’re being chased by militias and some prison directors who are threatening to kill us because we’ve exposed and published violations.

Magharebia: What are your goals?

Houari: All prisons must be placed under the justice ministry’s control so international standards for running prisons may be met. Local and international rights groups must be allowed to routinely visit prisoners to check on their conditions and listen to their complaints. Supervisors of these prisons must also attend courses to psychologically prepare them to deal with prisoners humanely.

In this way we can prevent, or at least reduce, the violations.

Magharebia: Who’s in charge of these detention sites?

Magharebia: In the eight months since your organisation was founded, what have you done to bring attention to this issue?

There is still much work ahead of us to improve and promote human rights in Libya.