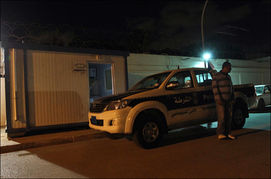 Seven Egyptian civilians were found shot dead execution-style on a beach outside Benghazi on Monday (February 24th).The killings in Jalluta prompted the Egyptian government to summon the Libyan ambassador to Cairo.

Benghazi residents voiced outrage over the brutal murders of the civilians.

“These horrific acts can only be done by al-Qaeda,” engineer Ahmed al-Warfalli said.

“Al-Qaeda is the number one suspect in murders and heinous crimes,” al-Darsi said. “We reject them because we as Libyans are moderate Muslims and know no extremism,” she added.

Wessam Massoud, 45, expressed his shock over what he called “this disgraceful act”.

“Crimes are now targeting our Arab brothers in Libya,” he added.

“Those Egyptians who were killed are poor people; they were strangers looking for a living,” remarked Bassem al-Agouri, a 38-year-old teacher. “By God, these are heinous acts against humanity which we condemn, and we’ll only face problems that we don’t need with sisterly Egypt because of that.”

Mohamed al-Fitouri, 28, a salesman, said, “Those who committed these horrible acts can’t be described as humans; there is no bit of humanity, morals, or religion about them. I can only describe them as dirty, cowardly and mean. There is no power but from God Almighty.”

Ayman Beshr, 29, a teacher, said: “We can’t yet say that they were killed because they were Coptic Christians.

“Unfortunately, killing in Libya these days doesn’t spare old or young, Christians or Muslims,” he said.

Abou Bakr Younis, a 62-year-old lawyer, said, “May God damn those criminals who affiliate themselves with Islam and God.”

“Is their god the God we know or do they have another god who is bloodthirsty? It’s a god that they created in a certain way to suit their crimes and lust for power, but Islam has nothing to do with them,” he added.

Meanwhile, other foreigners kidnapped by Benghazi gunmen on Sunday have been found alive.