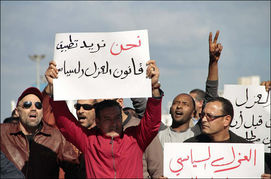 Proponents of Libya’s political isolation law rallied outside the Supreme Court in Tripoli on Monday (February 24th) as justices heard a case urging the law be struck down.The court delayed ruling on the case until April 28th. That did not stop protestors from voicing support for the controversial statute, which bars any Kadhafi-era official from serving in government regardless of his role in the revolution.

“I find it odd that those who demand to implement the political isolation law demonstrate in front of the Supreme Court while it is in session to discuss the repeal of the law that has been filed by 44 Libyan legal and political figures,” commented Benghazi political analyst Moataz al-Majbari.

“It was not enough for these people to demand an exclusionary law,” he said. “Now their demands extend to not permitting the court to consider the appeal, a legal procedure in all respectful countries,” he said.

Al-Majbari said he hoped that the court would not yield to threats and the demonstrators’ pressure.

“Generally speaking, I consider the political isolation law to be a stain of shame on the Libyan authorities,” he told Magharebia.

“This law stands in violation of human rights principals; it is a distinctly exclusionary law. Libya is a new-born state that needs reconciliation and inclusion of everybody in the transition process,” the analyst added.

The law has been criticised by Human Rights Watch for “potentially barring anyone who worked for the authorities during four decades of Kadhafi’s rule”.

The law even applies to two of the judges on the Supreme Court, noted Mohi al-Din Aoun, a delegate on the political isolation steering committee.

Citizens are divided over what removing all Kadhafi-era figures would mean for the country’s future.

According to Ahmed Yousef, a 32-year-old IT engineer, “no more people with a connection to the regime will herald a new spirit of building a free Libya”.

“I think the political isolation law has been introduced at gunpoint and I therefore do not accept it,” businessman Khalil al-Badri countered.

“Keeping those who’ve had a key role in the revolution will help us in the stage of building Libya,” he added.