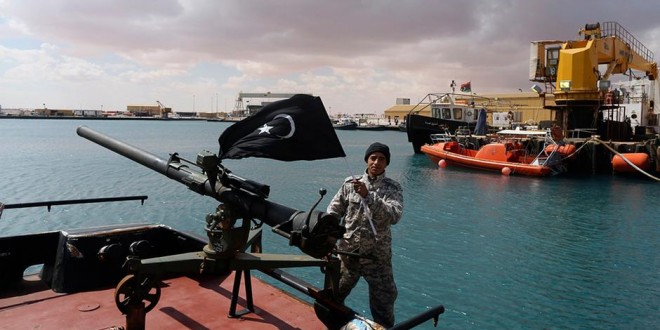 Libya’s deposed prime minister is seeking refuge in Europe. The country he left behind is falling apart. Politicians, militias, and ethnic groups are struggling for power.

Deposed Libyan Prime Minister Ali Zeidan is now in Malta, the Maltese government confirmed, on a stopover toward a reported destination of Germany.

Zeidan fled his country immediately following a vote of no confidence which ended his roughly one-and-a-half-year term as prime minister of the North African country. The hasty departure of the ex-diplomat rendered moot any attempts to arrest him. The charge? Corruption.

Zeidan, who during his term as prime minister was once kidnapped and held for hours by armed militants, failed in recent days to stop rebels in the country’s east from controlling the sale of crude oil there. In spite of armed forces loyal to the government ensuring that a tanker called “Morning Glory” remained in harbor in Al-Sidra – the city has been held for months by rebels – it left port and escaped flying a North Korean flag. Back in Tripoli the blunder turned the mood in the provisional parliament against Zeidan. The subsequent no confidence vote was later criticized by Libyan media as a “trick” on the former prime minister.

Rebel leader Ibrahim Jathran now appears to be the winner in the war of nerves over the strategically vital oil harbors. Until July 2013 he was commander of the unit sent to protect the oil installations, explains Libya expert Amanda Kadlec of the Chatham House think tank in London.

“This gave him ease of access to all the port facilities throughout Libya,” she told DW. His supporters have occupied three terminals, she says, and he has called for a separate government for a portion of eastern Libya. It remains unclear how many fighters Jathran commands, but according to Kadlec, reports range anywhere from 800 to 20,000.

A cry for autonomy

The east Libyan Cyrenaica region differs in history and culture from the west Libyan region known as Tripolitania. Many east Libyans feel discriminated against by the capital, and they are demanding a greater share of oil revenues and more political autonomy, says Arturo Varvelli at the Institute for International Political Studies (IPSI) in Italy.

“But it’s not very clear if they are all separatists or autonomists,” the Milan researcher told DW. Many, he says, are against a course of confrontation by Jathran, implying that the important tribe in the Cyrenaica region is against secession.

In Libya’s General National Congress (GNC), the man profiting most from Zeidan’s ouster is Nuri Abu Sahmain. The two have long been opponents in parliament, and Abu Sahmain is said to have played a role in the brief kidnapping of Seidan last October. But according to Kadlec, he probably has nothing to do with the recent tanker episode.

“Abu Sahmain is allegedly aligned with Islamist camps within Libya,” says the Libya expert, while many Islamists are against rebel leader Jathran.

A major source of disturbance are the hundreds of local militias – groups who formed during the civil war that toppled dictator Muammar Gadhafi in 2011. Some of the partially uniformed and well-armed troops behave in accordance with the government in Tripoli, but others are out to prevent the central government from curtailing their influence. On many occasions militias have blocked or stormed government institutions when they reject decisions made in Tripoli.

Ethnic minorities, too, are unhappy with the central government. The Berber, Tuareg, and Tubu live primarily in western and southern Libya, and they demand greater recognition and a greater say in politics. “The want to have a major role, and not a secondary role in Libya,” Varvelli says.

In February the groups boycotted constituent assembly elections, saying the number of seats allotted to them was too small.

To get out of the political crisis, Kadlec says the country needs more than just a new government. Parliamentary elections are expected over the next three months, as well as a new constitution. National dialogue should also be pursued, she says, bringing various armed groups to the table. Only if all of that can be accomplished can the disastrous situation improve.