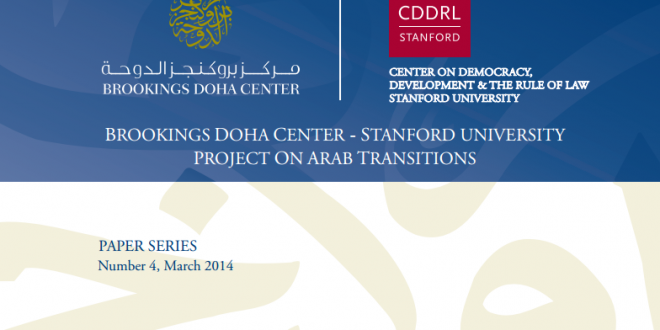 Nearly three years after the fall of the Qaddafi regime, Libya’s revolution has stalled. Militias continue to run rampant as the government struggles to perform basic functions. Theoretically to protect the revolution, Libya passed its Political Isolation Law (PIL) in May 2013, effectively banning anyone involved in Qaddafi’s regime from the new government. The law has raised serious questions: Does it contribute to effective governance and reconciliation? Does it respect human rights and further transitional justice? Will it undermine Libya’s prospects for a successful democratic transition?

In this Brookings Doha Center-Stanford “Project on Arab Transitions” Paper, Roman David and Houda Mzioudet examine the controversy over Libya’s PIL and the law’s likely effects. Drawing on interviews with key Libyan actors, the authors find that the PIL has been manipulated for political purposes and that its application is actually weakening, not protecting, Libya. They caution that the PIL threatens to deprive Libya of competent leaders, undermine badly needed reconciliation, and perpetuate human rights violations.

David and Mzioudet go on to compare the PIL to the personnel reform approaches of Eastern European states and South Africa. Ultimately, they argue that Libyans would be better served if the PIL were replaced with a law based on inclusion rather than exclusion and on reconciliation rather than revenge. They maintain that Libya’s democratic transition would benefit from an approach that gives exonerated former regime personnel a conditional second chance instead of blindly excluding potentially valuable contributors.