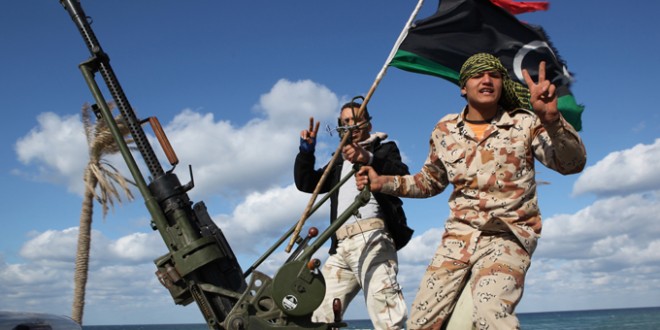 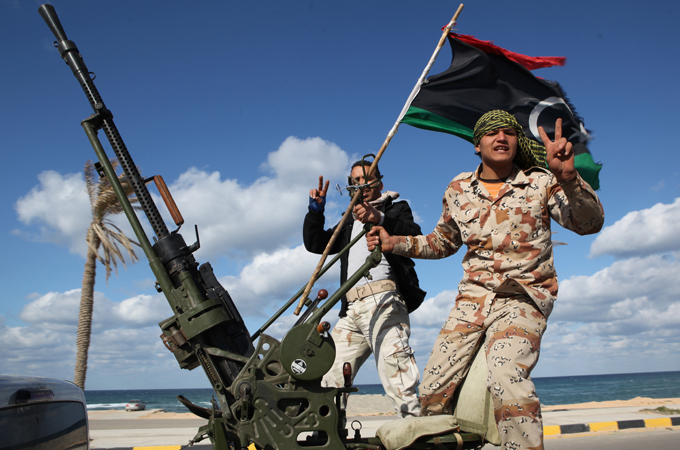 In Tripoli, daily life has been torn apart by militia clashes, political turmoil and uncertainty over Libya’s future.

It’s early evening and the outside tables are nearly empty at central Tripoli’s Café Casa as fear spreads about mounting violence.

Normally the wooden tables and wicker chairs are full of patrons enjoying the café’s famous hot chocolate topped with whipped cream, but nightly militia battles have driven many away.

“Winter weather is partly to blame, but people are going home earlier these days,” said Ahmed Jafi, a 21-year-old waiter in a black baseball cap displaying the logo of the café. “People are nervous to be out at night. We have less foreigners, too.”

An oil blockade in the east, and the failure of the government to prevent rebels loading some of that oil onto a rogue tanker, has sharpened tensions across Libya – with some talking of possible civil war. For several nights Tripoli’s sky has been lit by gun flashes from militias clashing in the southwestern suburbs. One battle saw gunmen storm and burn the headquarters of the Second Army brigade.

“I started to get the feel of how fireworks sound, and how real explosions sound,” said one of Café Casa’s few customers, photographer Majdi el-Nakua. “I struggled to become a real expert – now we all are.”

Across from the café is the handsome white clock tower that gives the little square its name, built in 1866 by Ali Pasha Gezadi when the city was underOttoman rule. It is a reminder that Libya is a relatively young country. Under Ottoman control, the three provinces of Tripolitania, Cyrenaica and Fezzan were separate entities, united only in the 1930s by Italian colonisers after years of brutal fighting. Now some fear the country is breaking apart along regional lines.

In Cyrenaica, a self-styled Political Bureau was set up last summer by the commander of the oil protection force, Ibrahim Jathran, who mutinied, then used his troops to blockade the oil ports. His bureau – complete with a cabinet and military force – is not popular with all in the region, but Tripoli has so far been unable to persuade army units in the east to make a move on the blockaders. Fezzan, in Libya’s southwest, has similar complaints, arguing that it produces oil but sees little investment from the government.

Community leaders met last week to debate some form of autonomy. And Tripoli, home to several out-of-town militias, is where many of these political disputes burst into the open. Congress is under pressure for voting to stay on beyond its mandate. Opposition television stations display an icon showing a football-style red card – a call for the parliament to dissolve. Congress leaders, themselves, insist Libya must have a congress until fresh elections can be held in July.

On Monday, the political equation changed when US Navy Seals stormed the rebel tanker Morning Glory off Cyprus, choking off the chances of the rebels selling oil independently. Diplomats hope it opens the possibility for a negotiated settlement.

But tensions are running high. Last week, Congress reacted to the failure to stop the tanker breaking out from the rebel held port, Es Sidre, by firing Prime Minister Ali Zeidan. After prosecutors said they were investigating him for corruption, he fled the country for Germany proclaiming his innocence and saying his ousting was unconstitutional.

“They got rid of Zeidan and left his cabinet in their place, so everyone is confused. No one knows what will happen next,” said Jamal, a student in the capital Tripoli, who asked that only his first name be published for security reasons.

The Libya Shield, a network of pro-government militias, has been mandated to take the oil terminals by force. A number of Cyrenaica militias have in turn set up blocking positions to oppose them at a valley called the Red Wadi.

Tribal elders, one of Libya’s most effective negotiating mechanisms, are meeting in several places to try and talk all sides down, and some are calling for the United Nations to be invited to mediate. Apprehension is everywhere in a city awash with guns.

“Going out at night, you’re always a little afraid, you are always thinking something could happen,” said el-Nakua. “Some guy you know will be killed, not for political reasons, maybe for a ridiculous reason, like a fight for a parking spot or something.”

Three years after the revolution that toppled Muammar Gaddafi, Tripoli is tormented by practical problems. Some banks are running short of cash, and an industrial dispute in the main refinery at Zawiya has caused petrol shortages with long lines of cars at the few working gas stations.

“This situation is absurd,” said Mohamed, who drives a black-and-white taxi and was waiting in a half-kilometre line for petrol in eastern Tripoli. “We have so much oil in Libya, and we have petrol shortages.” He, too, gave only one name for safety reasons.

Business is also feeling the pain. Abdullah Abdul Nassar owns Tripoli’s premier honey shop on the busy Omar Mukhtar thoroughfare. His shop window features a dummy showing a beekeeper in full white protective gear. Normally, he would be busy with the new intake of spring honey, but supplies are down, with no deliveries from the growers in the Green Mountains in Cyrenaica after fighting on the coastal highway.

“People in Tripoli are afraid,” he said. “When the sun goes down, people are staying in their homes. They are afraid from the militias and this affects business.”

Libyans are frustrated at the slow progress of reform. The government inherited a dysfunctional bureaucracy and legal system that has meant much-needed improvements to schools, hospitals and roads are delayed. International oil companies are pulling out, and in Tripoli’s southwest suburbs, a forest of rusting cranes marks the stalled construction on huge, half-finished apartment projects abandoned in the 2011 revolution.

But there are signs of individual initiative in this city of two million people, one-third of Libya’s population. Walls are covered in imaginative graffiti and pop art. When government agencies failed to clear mountains of rubbish accumulating outside the walls of Gaddafi’s ruined Bab al-Azizia compound, local residents did the job themselves. A digger was found and citizens got to work – accompanied by the hooting of horns from appreciative passing drivers.

Near Café Casa, souvenir sellers are having a hard time in Martyr’s Square as customers dry up. The square is fronted by the Red Fort, a castle dating from Ottoman times and still displaying the wooden mastcaptured from the USS Philadelphia in a battle a century before.

“I still sell some flags but business is light,” said Khalid, standing among a collection of model cars and toy birds he is selling in one corner of the square. He didn’t want his last name published.

“We are one Libya, one people. We fought together for this revolution, we need to stay together,” he said. “We need everyone to talk. There are elders, there is the United Nations, there are wise men – people should listen to them.”