In a major blow to its power and position, Benghazi’s Saiqa Special Forces Brigade has been forced to abandon its headquarters in Buatni district after another day of intensive missile strikes by Ansar Al Sharia and its allies. Pictures of Ansar’s head Mohamed Al-Zahawi and Wissam Ben Hamid, the leader of Libya Shield l were shown in a video posted today standing in front of the headquarters.

Saiqa had earlier denied the loss. However, Saiqa Commander Wani Bukhamada acknowledged the decision to pull out late this afternoon.

Ansar are reported to have also entered the nearby 21 Battalion headquarters, another Saiqa unit under the control of Salim Nayli.

In a further blow, a Mig jet fighter being used by the Operation Dignity forces of which Saiqa is a part, crashed into waste ground in Kuwaifiya,. However, no one was hurt. The pilot ejected safely. According to Mohamed Hejazi, spokesman for Operation Dignity, the aircraft suffered a malfunction. It had not been shot down, he insisted.

Ansar and its allies launched their offensive against the Saiqa base a week ago. Following the attack, Bukhamada put out an appeal for urgent reinforcements to repel its opponents. Since then fierce fighting between both sides, which has seen continued missile attacks by Ansar and its allies and air strikes by Operation Dignity planes, has inflicted massive damage in the district and surrounding areas, notably Leithi, an Ansar stronghold. Dozens have been killed and many more injured.

Late last night there was heavy fighting in Leithi until well after sunrise as Operation Dignity forces tied to weaken Ansar and its allies. Further fighting in the district is expected tonight.

Earlier today, the head of Saiqa Special Forces Investigations Unit, Fadel Al-Hassi, said that Saiqa had captured 12 Ansar members in the Buatni area near its headquarters. Claiming them to be snipers, he said three were Syrians, five were from Derna and the rest from Benghazi.

Also speaking to the Libya Herald today, Hijazi would not divulge much but insisted that everything was under control. In noticeably defiant mood, he refered to Ansar and its allies as “dogs” who did not care about the Libya people, declaring that “these are their last days”.

The same sort of defiant language came from Air Force Brigadier-General Saqr Adam Geroushi, the commander of Operation Dignity’s air forces a couple of days ago when speaking to this newspaper he too said Ansar was facing destruction. “This will take time. But we will win,” he said, divulging that Operation Dignity had new equipment.

Reports however say that Ansar has also been receiving new equipment.

Meanwhile, roads in Buatni and Budaima districts remain closed and resident are not being allowed in. 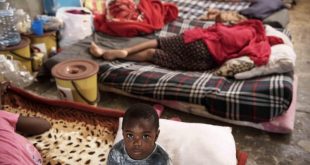