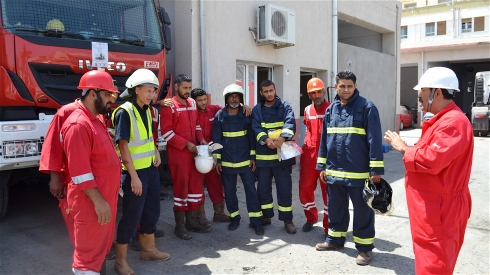 TRIPOLI 26 August 2014 (IRIN) – Black smoke from a massive fuel depot fire has been lingering over the heads of the residents of the capital Tripoli for more than four weeks. While the smoke has lessened since July, the fuel fires, water-supply cuts and regular gun-fire are signs that the country is going through one of the most difficult periods since the 2011 revolution.

TRIPOLI, 26 August 2014 (IRIN) – Things are bad in Libya right now. Black smoke from a massive fuel depot fire has been lingering over the heads of the residents of the capital Tripoli for more than four weeks. While the smoke has lessened since July, the fuel fires, water-supply cuts and regular gun-fire are signs that the country is going through one of the most difficult periods since the 2011 revolution.

The fire, involving eight tanks holding 70 million litres of fuel, began on 27 July when a missile hit a storage tank.

“They are the biggest fires I have ever seen in the 15 years I’ve been a fireman because this is not a regular fire but involves both burning oil, and also fighting which prevents us entering the Brega oil company [where the fuel storage tanks are located] when we need [to],” head of the National Safety Authority (NSA) Col Mahmoud Al-Jayer told IRIN.
The first storage tank to explode led to a neighbouring tank also catching fire, and strong winds ignited a third. As the militia clashes became more and more violent, a second missile ignited a fourth tank on 1 August. Finally, four more tanks caught fire because of the heat from the first four fires. At that time firemen had to withdraw.

Up to 250 men – 150 from NSA and 100 from Brega oil company – have been working to extinguish the fire. Twenty fire trucks from NSA and 15 from the oil company have been used, and 10 water trucks with a capacity of 20,000 litres were borrowed from Libyan water companies.

“We consider that the fires are now under control,” said Col al-Jayer. The Italian government had said it was ready to send water-bombing planes if security could be guaranteed. But according to al-Jayer, this would only have spread the oil fires. “No other country would have done any better than us given similar conditions,” he said. NSA firemen and Brega oil staff are now trying to let the fire burn itself out.
Ongoing fighting in Tripoli, which has killed hundreds in the last month, prevented IRIN from visiting Brega oil company.

Gas blast fears
“I am too scared to leave my house because of the shootings but I fear that the fires can start again and provoke the explosion of the gas,” a 24-year-old woman living 3km from the depot, told IRIN.

The depot contains 21 tanks: 15 fuel tanks and 6 gas tanks. Among the 7 fuel tanks not currently alight, 3 are full, while the other 4 have 15-20 million litres of oil in total.
The biggest worry is that 3 out of the 6 tanks contain gas. Two of them contain 50 cubic metres of gas and the other one 400 cubic metres. “I prefer not to think of the consequences if the fire or another missile hit the gas tanks directly,” said the colonel. The authorities have asked inhabitants living within 5km of the fires to leave their homes.
Many shops are closed in central Tripoli due to the fear of violence, the departure of foreign staff, and also the lack of fuel. Brega oil company was one of the biggest oil depots in Tripoli and the fires triggered a spike in oil prices on the black market – from 3 LYD (US$2.45) for 20 litres of oil to 120 LYD ($97.72), though it is now around 60 LYD ($48.86).
The authorities have brought in fuel tanker ships to the port to deliver extra supplies in order to ease business activities, allowing more shops to open this week.

Ayman* is a doctor at Tripoli Medical Centre. His wife left the capital in June because of the insecurity (the parliament building had been looted by armed groups in May). He decided to stay “because it is my country. I had to help my people.” But he says things have got continually worse over the last two months. This week he decided to leave the country and re-join his wife: “At a point, you have to protect your own life and think to your family,” he said.

Election revenge?
The current armed clashes in Tripoli, which started on 13 July, involve brigades from the two most powerful cities in Libya: Zintan (170km southwest of Tripoli) and Misrata (200km east of Tripoli). On 23 August, Misrata fighters and their Islamist allies took over the international airport, which had been under the control of Zintanis since the death of former ruler Muammar Gaddafi in October 2011.

Islamists were defeated in a general election on 25 June, after having dominated previous parliaments. Their military operation, called “Libyan Dawn”, coordinated by Misrata militia and Islamists, was a way “to punish Libyan electors who voted against the Islamists, who are quite influential in Misrata”, according to Huda Mzioudet, a researcher for the Libyan think tank Sadeq Institute. Misratis and Islamists accused the Zintanis of being “Gaddafists” because the city made alliances with tribes which mainly supported Gaddafi during the revolution.

There are now two parliaments meeting: the former General National Congress, and the newly elected and internationally-recognized House of Representatives. The latter accuses the GNC of sitting illegally, but the GNC says it has re-launched “to protect the country’s sovereignty”, according to Omar Hmeidan, the GNC spokesperson.

The House of Representatives, based in Tobruk (eastern Libya), declared that the “Libyan Dawn” operation was led by “outlaw terrorists” and authorized the national army to target them, though the weakened national army has not yet intervened.

“If any third party [outside forces] intervenes to try to cease the [Tripoli and Benghazi] fighting, we could imagine Libya falling into a true civil war,” said Mzioudet.

Benghazi, Libya’s second city, is also struggling with unrest. Jihadist groups, of which the Islamist militia Ansar al-Sharia is the most prominent, and an armed group led by former general Khalifa Haftar, have been fighting since mid-May.

The House of Representatives called for international help on 13 August to “protect the civilians”. So far it has not been forthcoming.

*Not a real name