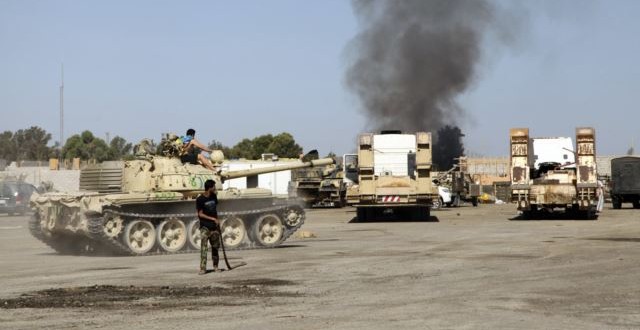 The airstrikes, which reportedly targeted Islamist-aligned militant-held facilities, killed more than a dozen people. Egypt has denied the reports.

Washington and the European Union have been working toward a political solution to the impasse in Libya since the international community helped topple President Moammar Gadhafi in 2011.

Newly appointed U.N. envoy to Libya Bernadino Leon said any kind of foreign intervention would not help Libya get out of its current chaos.

“No more conflict, no more confrontation, no more war, because it will only create a more chaotic situation, which is the worst situation for neighboring countries, for the European Union and for the international community,” said Leon.

Libya has a number of warring tribal groups, and two main armed political factions including an Islamist militia. But analysts see the conflict there as a civil war, without a powerhouse Islamist terrorist group like the Islamic State that has taken control of vast areas of land across Syria and Iraq.

But Egypt and the United Arab Emirates are concerned about the rise of power of Islamist groups in the region, and would want to quash any group that could potentially threaten their political status quo. Egypt’s military has decimated the Muslim Brotherhood in its own country.

Carnegie Endowment for International Peace senior Middle East associate Frederick Wehrey said the regional intervention was an escalation of the conflict and a dangerous development for the region.

“I think it is part of a larger regional trend of these states not seeing eye-to-eye with Washington about the region. I do think they intervened under the guise of fighting terrorism or battling these militants, but I think what they are really trying to do is engineer a political outcome in Libya where there is no Muslim Brotherhood, there is no Islamists,” he said.

Major vacuum
American University Islamic studies professor Akbar Ahmed said the United States administration was perceived in the Middle East as being missing in action from its traditional role of judge and referee.

“When the United States moves outside and stops playing that role, you have all kinds of very interesting dynamics taking shape, and this may well be a result of the UAE saying, “all right, you are not here” or perhaps coordinating with the United States saying, “we are going to take a much more active role in order to establish that we are there, we are there with you, and in your camp,” he said.

But Ahmed warned when countries like the UAE started taking a more aggressive posture in countries as unstable as Libya, the results could be unpredictable.

Despite the airstrikes, Islamist militants have gained control of the Tripoli airport. The violence in Tripoli and Benghazi has prompted several countries to evacuate their citizens and diplomats from Libya.