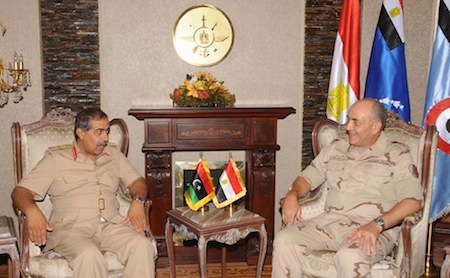 Libyan Chief of Staff Major-General Abdul Razzaq Al-Nazhuri met with Egyptian Chief of Staff Lieutenant General Mahmoud Hegazy on Wednesday to discuss cooperation between the two countries’ militaries in order to achieve stability in Libya. The meeting was one in a series of meetings that took place in Cairo this week between ministers from Libya and its neighboring countries.

Sisi had already indicated he planned to submit plans on Libya to the UN Security Council today in order to bring about stability in the country. They flow from meeting between Libya’s Abdelaziz and ministers from neighbouring countries hosted by Shoukri.

One of the major points of the proposals is that all militias and armed groups permanently disarm and that the army, police and legitimate democratic institutions in Libya, including the HoR, be supported. They also call for the close monitoring of arms moving in and out of the country with shipments to be authorised only by the government and the UN Secuirty Council’s Sanctions Committee.

Acording to Nazhuri, those who are willing to hand over their weapons will be invited to participate in national dialogue.

“We will talk with those who wish to hand over weapons, while terrorist groups that insist on the use of violence will be crushed, and we are capable of doing so,” he stated.

International Relations and Cooperation
All
2014-08-28
activate
Previous Egypt proposes committee of neighbouring nations to oversee peace
Next Backdrop to an Intervention: Sources of Egyptian-Libyan Border Tension