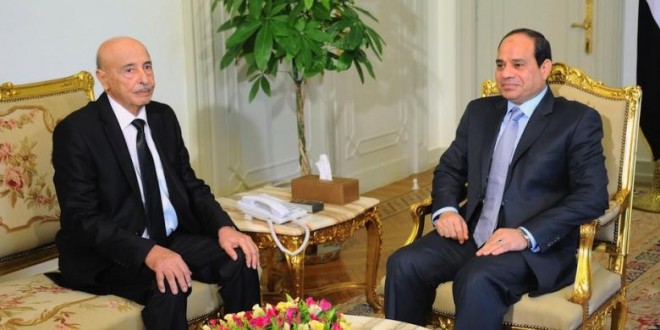 Egypt seeks a bigger role in the ‘new Libya’

As the situation in Libya is deteriorating and becoming more complicated by the day, the Egyptian government has already announced its support for the elected authorities, taking the side of General Khalifa Haftar. Meanwhile, it has been reported that Egyptian and Emirati jets have launched airstrikes against designated targets deep inside Libyan territory.

Cairo – According to a high level political source in Egypt, who spoke to Al-Akhbar, “Egypt is taking measures to reach common grounds with all Libyan factions without giving any party leverage over the other, especially since the political establishment is seeking an active role for Egypt in Libya.”

He reiterated the official Egyptian position, saying “the army has not taken any actual action until this moment but it will not hesitate to launch an airstrike if deemed necessary.”

The source stressed that “any discussion about military intervention will always be based on whether Egyptian interests are being threatened, and will not be related to anything else and will have nothing to do with other conflicts between military commanders, with some of them possessing sophisticated weapons.”

He also ruled out any military engagement in the near future “unless an Egyptian consulate or the Egyptian embassy is harmed,” assuring that “any military action will be public and targeted and in coordination with the Libyan authorities.”

“The army has not taken any actual action until this moment but it will not hesitate to launch an airstrike if deemed necessary.”

“Egypt does not need to use UAE jets to take military measures in Libya, especially since the Egyptian air forces own enough military jets which would enable them to conduct such operations if they choose to.”

Said explained that for UAE aircrafts to reach Egypt, they will have to pass over a number of countries first, adding “the excellent political relations between the two countries do not necessary mean allowing (the UAE) to use Egyptian airports,” to carry out military strikes.

The general stressed that “the Egyptian army has a well-established doctrine regarding conflicts in neighboring countries, and Cairo will not resort to military actions unless there were Egyptian targets that should be protected and secured.”

“Military commanders in Libya have already issued statements welcoming the Egyptian army’s assistance to maintain security; it was the Egyptian side that has refused. Therefore, if the army had indeed carried out the airstrikes, it would not have had to deny it,” he added.

For Said, “conducting the airstrikes, in the way it has been reported, makes no sense and does not fit with any military theory. It, however, has political and regional dimensions, involving the position of Western states regarding the events in Libya.”

He further explained that “Egypt is supporting the legitimate authorities in Libya and will provide them with all assistance to rebuild their collapsed state.” He also described the series of meetings held between the Egyptian and Libyan military leaderships as “reasonable” since Libya is very important to Egypt’s national security, and the chaos in the country is threatening Egypt’s stability.

Also speaking to Al-Akhbar, former Egyptian Foreign Minister Mohammed al-Arabi said “the position regarding Libyan factions and tribes is rather complicated, and Egyptian foreign policy usually refrains from interfering in the internal affairs of other states.”

He, however, pointed out that the Egyptian interest in Libya is normal, since the two countries have a special relationship and share long borders. In addition, Libya is a large importer of Egyptian labor. Therefore, any military action should be well-calculated in order not to harm the jobs of many Egyptians still living in the country, despite the mass returns that took place in the last few weeks.

According to the Egyptian diplomat, Egypt’s vision for disarming and training Libya’s army and police forces is linked to Cairo’s wish to restore peace and security to the country.

This article is an edited translation from the Arabic Edition.

The article was originally published here.