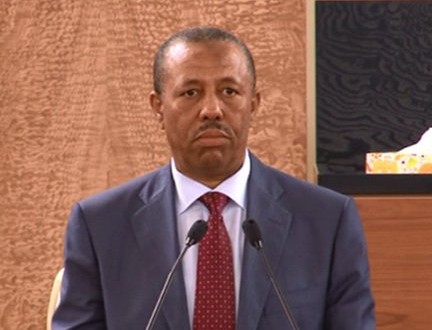 The House of Representatives, at its meeting in Tobruk today, asked acting Prime Minister Abdullah Al-Thinni to form a new government within two weeks. According to HoR spokesman Faraj Hashem, the government is have between eight and ten cabinet ministers.

Thinni was the favourite among five contenders shortlisted by the HoR for the premiership. The interim government he led resigned on Friday to allow it to make a new appointment.

Hashem told the Libya Herald that although Thinni has been given two weeks to formally nominate his ministers, he had in fact already provided parliament with the names. However, Hashem would not disclose them.

Thinni has been caretaker prime minister since being asked by the former General National Congress on 11 March to take on the post temporarily after it sacked Ali Zeidan. It then reappointed him several times as caretaker because it was unable to gather sufficient votes to appoint a fulltime replacement to Zeidan. Under Congress rules, a minimum of 120 were needed.

On 6 May, however, it seemed that Congress had overcome the hurdle when it announced it had sacked Thinni and appointed Ahmed Maetig as prime minister by 121 votes. But the appointment was challenged on constitutional grounds and on 9 June was overturned by the Supreme Court on the grounds that the quorum had been unconstitutionally assembled because a number of those who voted had been turned up after proceedings had begun.

Today, Thinni – whose appointment is now officially permanent – was chosen by 64 out of the 106 members attending this morning’s session. It is just over half the number specified by Congress as being needed to appoint a prime minister. However, the HoR says that the 120-vote threshold no longer applies because last month it voted to itself presidential powers until such time as a president is elected. It says that with such powers, it can appoint a prime minister by a simple majority vote.

Compared to the 64 votes, just five were cast a week ago when the rival General National Congress “appointed” Omar Hassi as prime minister.

In a separate development, the outgoing government has said that it no longer has any control over ministries and government institutions based in Tripoli. The declaration is unlikely to have any political impact, however, since it is a statement of the obvious. In any event, the ministries in Tripoli at present exercise no power in the country.