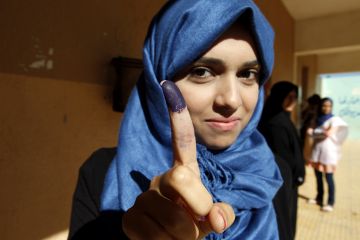 The High National Elections Commission has announced candidates who are standing for election to House of Representatives for Derna.

The town and surrounding area were unable to take part in the HoR elections on 25 June because of fears that militants would attack the polling stations. In the Constitution Drafting Assembly elections in Februay five schools used as polling stations in Derna were  attacked and one man killed.  Until now, there has been little hope that Derna district would be able to be elect any members to the HoR. It is entitled to three general list members and one woman member.

The candidates standing for election in the town of Kherallah Younis Al-Terkawi, Abdulkareem Faisal Mohamed Al-Ghayshi, and Amro Abdulghani Abdurrahim Azuz.  The candidate for the women’s seat is Intisar Mustafa Al-Hadi Shanin, who as the only candidate will be automatically selected.

The HNEC announcement has not stated when the election will be.