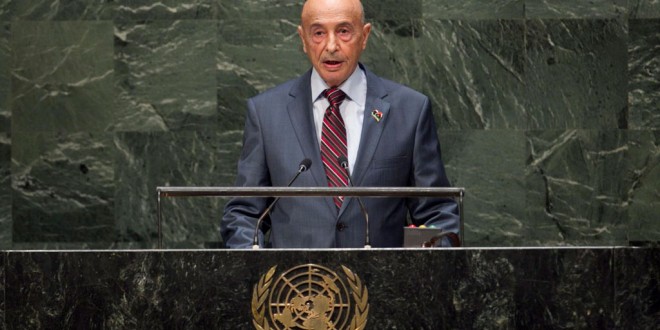 27 September 2014 – The international community must either be willing to impose sanctions against those who hinder Libya’s political and security process, or say clearly that Libyans alone have to face terrorism, a senior official of that country told the annual debate of the United Nations General Assembly in New York.

“Turning a blind eye to terrorism in Libya is…unacceptable,” Agila Saleh Essa, President of the House of Representative told the 69th session of the General Assembly.

He called on the international community to stand with “the elected legitimate authorities” and implement UN Security Council resolution 2174, which passed earlier this year, condemns the use of violence against civilians and civilian institutions, and called for accountability. It also reiterates that the importance of an open-ended embargo on the supply of arms and military equipment to and from Libya.

In his address, Mr. Essa urged the Friends of Libya, an international group established in support of the Libyan National Transitional Council, to reinstate an army and provide it with “the necessary means to stop the fighting among brothers, and assist in the fight to combat terrorism and extremism.”

The senior official cautioned that a failure to provide arms and training to the Libyan army in its war against terrorism would further destabilize the country, threatening regional relations and global peace.

Mr. Essa also called for the international community’s help to regain control over the capital, Tripoli, and ensure the withdrawal of armed groups from State institutions.

Illegal institutions established in parallel with the existing bodies impede political process, he said, and should be subject to sanctions.

He also called for “genuine and active cooperation” to combat terrorism, and for inclusion of all groups in a comprehensive dialogue, with help from the UN Support Mission (UNSMIL), neighbouring countries, the League of Arab States and the African Union.

Mr. Essa’s address follows a high-level event on Libya, held Thursday on the margins of the annual debate.

In his remarks, Secretary-General Ban Ki-moon called the political transition process the country’s “biggest challenge since the revolution,” with the legitimately elected legislature which Mr. Essa represents forced to base itself in Tobruk.

“We must do our utmost to reverse this course and help the Libyan people safeguard their democratic transition,” he stressed.