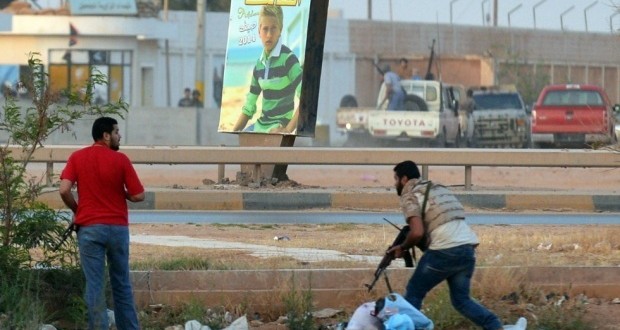 Nine more members of Saiqa Special Forces have died and three members of Benghazi Revolutionaries’ Shoura Council (BRSC) were also reportedly killed as the identities of those slain in the last five days of fighting continue to emerge.

The Head of Saiqa Special Forces Investigations Unit, Fadel Al-Hassi, told the Libya Herald that BRSC had continued its assault on Benina from several points but that with the support of Operation Dignity’s air forces the attackers had been repulsed.

He said that airstrikes had also been carried out on Buatni which has become a staging post for Ansar Al-Sharia and its allies as they attack Benina.

Ahmed Abid Al-Dressi, Abdullah Al-Khabasa and Abdullah Al-Moghrabi from BRSC were also reportedly killed in the clashes although medics at Benghazi Medical Centre (BMC) could only confirm the death of one of the three, Moghrabi.

The same medical sources explained that staff at the hospital were struggling to deal with the influx of dead and injured from the fighting. They explained that many of the bodies that had been brought in had not yet been processed.

While much of the recent violence in Benghazi has centred around Benina and surrounding areas, in the early hours of the morning a security building in the Sabri area was destroyed in a bomb attack. There were no human losses although the building was raised to the ground.

The latest surge in violence in Benghazi began on Thursday when BRSC carried out a double suicide bombing on Benina. Twenty four soldiers were  killed and 12 wounded in the initial blasts and subsequent fighting, according to the government.

Medical reports, however, put Thursday’s toll at 29 dead and dozens wounded. These are only the casualties on the army’s side. The number of BRSC’s dead and wounded was not disclosed.