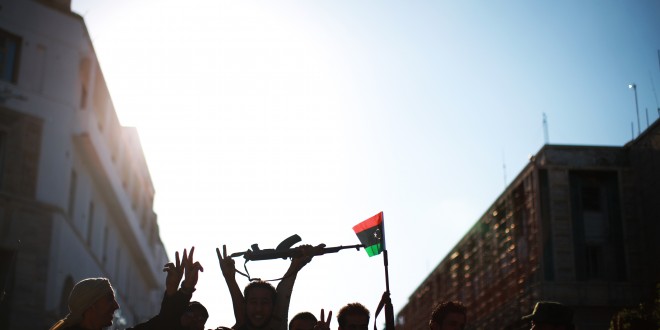 Following Friday’s declaration of allegiance to Daesh (the “Islamic State”) by Derna’s Shoura Council of Islamic Youth (SCIY) and its military parade through the streets, the town’s rival Islamist militia, the Abu Sleem Martyrs’ Brigade has said that it is not giving it allegiance to anyone outside the country.

The two groups have engaged in an increasingly deadly rivalry in recent months and two weeks ago at least six members of the two groups were killed in clashes.

The rivalry has not stopped others being killed.  It is suspected that a man reported to have been murdered in the town’s Shara Al-Wadi district today was killed by militants. Osama Bader Al-Mansuri, said to be a lawyer and activist, is reported to have opposed Ansar and the SCIY.

The Shoura Council is expected to announce the name of the town’s “emir” (prince or governor) later this week. In the Caliphate to which the SCIY has given its allegiance, each area is supposed to be run by an emir.

Meanwhile claims by Operation Dignity to have carried out the air strikes on a SCIY base and arms depot in Derna yesterday have been challenged by an eyewitness who told the Libya Herald that the strikes had been too accurate and successful to have been done by the Libya air force. “It was precision targeting”, he said, insisting that foreign air force fighters must have been involved.

His allegation that foreigners were also fighting with Ansar Al-Sharia and the SCIY has, however, been repeated by a prominent local resident who asked to remain anonymous. “There are Iraqis, Syrians and Tunisians among them,” the resident told this newspaper this afternoon. He added there was growing anger in the town with both the SCIY and the Abu Sleem Martyrs’ Brigade. “People don’t want them anymore,” he said. Public opposition to the group was the reason, he believed, why SCIY members had covered their faces in Friday’s parade.  They are afraid of the people of Derna,” he said.

The SCIY had organised a meeting yesterday on the Caliphate in the town’s historic Sahaba Mosque, he added, but there was almost no support for the idea.