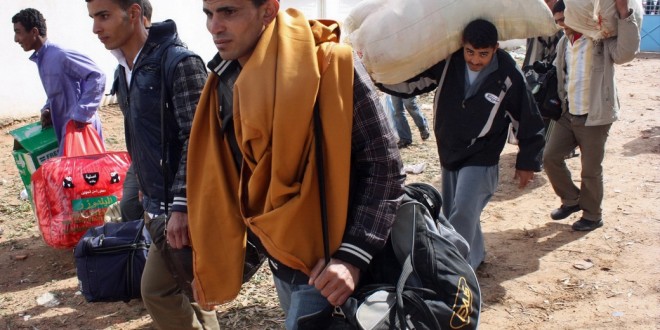 The UN sponsored talks are expected to begin again within the next few days after having the Eid holiday off. Tripoli has remained relatively quiet throughout the Eid al Adha festivities thus far, although militia leaders from Zintan have continued to claim that they intend to launch a counteroffensive against Libya Dawn forces in the capital.

Clashes have continued although with less intensity, in Warshefana areas to the south and west of Tripoli, with sources indicating that Libya Dawn forces regained control of Azizya during fighting on 04 October 2014

Benghazi has continued to suffere severe violence over the last few days with at least three car bombs which exploded near the Libyan “national army” military base close to Benina International Airport on 02 October killing an estimated thirty-six soldiers and police officers in addition to wounding eighty other security personnel. Fierce fighting also erupted between Hifter’s Operation Dignity forces and militants from the Islamist-led Benghazi Shura Council. The clashes continued throughout the weekend, both on the ground and from the air as Hifter’s forces carried out airstrikes on Benghazi Shura Council targets on 04 October in the Benghazi areas of Hawari, Gwarsha, Benina and Sidi Faraj

It is expected that the Supreme Court will consider the legality of the sessions of the House of Representatives being held in Tobruk tomorrow 08 October, although it is anticipated that a ruling will not be forthcoming.

Sources in the eastern city of Derna have claimed that the Council of Islamic Youth in Derna (CIYD) has declared its allegiance to the Islamic State (IS) group and its leader, Abu Bakr al Baghdadi. The news has raised concerns regarding the hostages currently being held by extremist groups in eastern Libya, but in a rare positive development, a British schoolteacher who was abducted in May 2014 was released on 04 October after reports that a ransom was paid.

Due to the current ongoing unstable situation within Tripoli, SNE advises that only business essential movements should take place within Tripoli city limits and no movement should be attempted in the hours of darkness or near the area of Tripoli International Airport and surroundings areas which has been affected by the ongoing militia fighting. SNE is advising NO travel should be made to Benghazi until the current situation shows signs of stability. The British FCO and US State Department are still advising against No travel to Libya and have advised all their citizens to leave the country at the first opportunity available.

SNE remains operational on the ground in Tripoli with our British Country Management Team and are able to support any remaining clients as required, or provide up to date accurate information and analysis on the ever changing situation to those clients who are currently out of country monitoring the situation with an aim to redeploying when the security situation allows. Before considering travel to Libya, an itinerary specific pre-travel risk assessment including mitigation measures are recommended. In-country personnel should be confident in their evacuation procedures and crisis management plans and in light of the current situation these should be checked and updated where necessary.