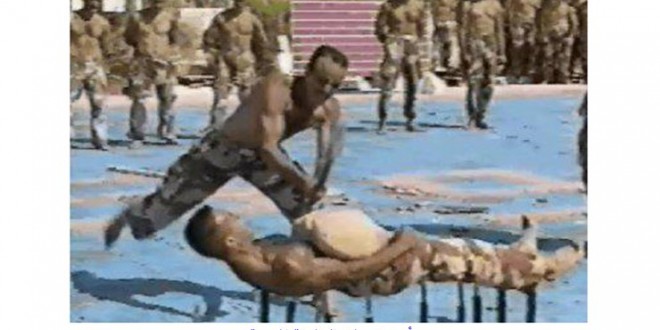 Thani and the majority of an internationally recognised parliament elected in June are in virtual domestic exile in the eastern city of Tobruk because of widespread insecurity, including in Tripoli, where a rival administration has been set up.

Tensions have been at boiling point for months. Violence has pushed the recognised House of Represntatives (HoR) to relocate to Tobruk 1,500 kilometres east of Tripoli while its rival parliament – based on the previous General National Council (GNC) – continues to meet in Tripoli after re-establishing itself in August. The renewed GNC accuses the HoR of favouring the so-called nationalist militias and siding with renegade general Khalifa Haftar against Libya Dawn.

After a meeting with al-Thani on Wednesday, Egyptian President Abdel Fattal al-Sisi released a statement saying he stressing that importance of the formation of a national, “non-sectarian” army in Libya.

Egypt shares a long and porous desert border with Libya, and has backed Thani against the militias that seized Tripoli and are fighting for control of the airport in the country’s second city, Benghazi.

“We are facing terrorism,” Thani told a press conference with his Egyptian counterpart, Ibrahim Mahlab.

“I call on all honourable citizens who refuse to be ruled by force to prepare to defend themselves. To die standing is better than to live humiliated,” he said.

Thani, in Cairo for meetings with Egyptian officials, said they are aimed at “coordinating cooperation (with Egypt) on implementing a practical plan.”

That would include Egypt “training and improving the efficiency of the (Libyan) army,” he said.

Pentagon officials have claimed that Egyptian airbases were used by United Arab Emirate pilots in a mysterious series of airstrikes that have hit the Mistratan Led Alliance (MLA) in Tripoli last month. Ten Libyans, picked up in August, are thought to be in the custody of Abu Dhabi’s State Security Agency (SSA) and are at risk of being tortured, according to Human Rights Watch who called for the UAE to reveal their whereabouts earlier this week.

In early September, Thani made an official visit to made an official visit to the UAE to meet Sheikh Mohammed bin Zayed, Crown Prince of Abu Dhabi and Deputy Supreme Commander of the Armed Forces. During his visit, he confirmed the detention of seven Libyans, without providing names. After the visit, Thani said in a press release that the Libyans would receive a fair trial.

Leaders in Egypt and Algeria, which both border Libya, are concerned that the violence will spill over into their territories.

More than 20 Egyptian soldiers have been killed by militants in recent months in the west of the country, raising fears that Islamist insurgents battling the government in Cairo seek to open another front from the Libyan border.

Libya has been sliding into chaos since longtime leader Muammar Ghaddafi was toppled in an uprising three years ago, with interim authorities confronted by powerful militias that fought to oust him.

Thani’s visit comes days after dozens of soldiers died in car bombings at Benghazi’s airport and clashes with Islamist militias. The troops were loyal to former general Haftar, who launched his “Operation Dignity” campaign in May to “purge” Libya of “extremists”.

Seven months later, tangible gains remain elusive for Haftar’s troops and Benghazi has turned into a battlefield between his forces and the Islamist Benghazi Revolutionaries Shura Council and Ansar al-Sharia militias.

In the latest spate of violence in Libya’s second city, Selim Nabbous, a commander of the Benghazi Revolutionary Council, was killed Wednesday in clashes with Libyan army forces, a medical source said. Eyewitnesses said planes associated with Haftar’s forces struck several sites in the city belonging to the Revolutionary Council and Ansar al-Sharia.

This article was originally published here.
International Relations and CooperationTraining and Education
All
2014-10-08
activate
Previous Reporting the facts in an hostile environment
Next 118 violent deaths in October to date in Libya, 1859 since start of 2014