Home / Normal / IS expands in Libya 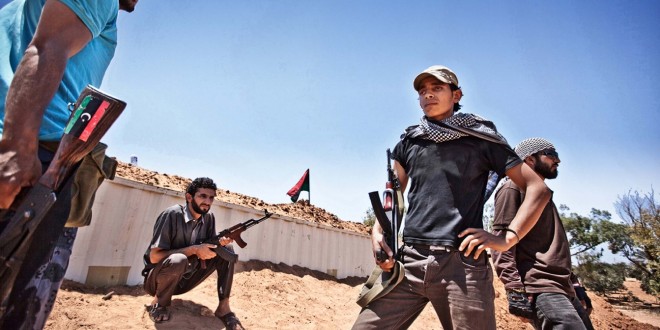 IS expands in Libya

While the Libyan state remains too weak to confront and disarm the plethora of militias still present within it, IS has been able to gain a foothold in the eastern city of Derna.
The Islamic State (IS) has threatened the Maghreb repeatedly, especially after many members of al-Qaeda in the Islamic Maghreb (AQIM) affiliated themselves with the terrorist group. The recent events in Libya, particularly those that occurred in the city of Derna, show that this danger is threatening its borders. Although an international alliance of more than 40 countries is fighting IS in Iraq and Syria, the situation in Libya is quite different. Under such anarchy, there is a pressing need for an international call to find a political and nonmilitary solution. But, what kind of dialogue can take place in light of the abundance of weapons and militias and amid the entwined interests of several countries in the Libyan scene?
Derna, sanctuary of radical Islamists in the Maghreb

New clashes broke out between rival Islamist militias on Sept. 21 in Derna, killing 12 Libyans and injuring four others. These clashes happened between the Abu Slim Martyrs Brigade and the Islamic Youth Shura Council, with reported deaths in both camps. The Islamic Youth Shura Council, which was created last April, has carried out a public execution in a football stadium in Derna. Such practices remind us of the Taliban in Afghanistan and IS in Syria and Iraq.

The armed clashes have divided the city of Derna, which has almost become the stronghold of radical Islamists, between militants of Abu Slim Martyrs Brigade affiliated with Ansar al-Sharia and the IS-affiliated Islamic Youth Shura Council. Targeted killings have also become commonplace, Colonel Salwa Hindawi became the fourth woman to get shot in the city when she was assassinated outside her home.

The law of militias in Libya

Facing this difficult situation, the Libyan government, through its internationally and officially recognized National Council serving in Tobruk, seems completely crippled. This government effectively has no power on the ground, since neither the army nor the police can ensure security for its members or cities. In Misrata (the third most populous city in Libya), the Libya Shield Force, which is close to the ruling Justice and Construction Party (JCP) — the political arm of the Muslim Brotherhood — and is based in Misrata, is part of the Fajr Libya Operation and has accepted the Ghadames reconciliation process [Ghadames is on the Algerian border].

The second influential group or militia is Mahmoud Jibril’s National Forces’ Alliance (NFA). Its presence extends throughout the region of Zentane and western Libya, and it rules under the banner of the Libyan National Army.

The third group consists of so-called jihadist militias in Derna and Tripoli who refuse dialogue. The language of weapons currently rules and any dialogue requires consensus with these militias because they simply control a large part of the territories and cities. It is noteworthy that most of these militias use Islam to cover up their financial issues and are working hard to maintain the status quo. Moreover, the interference of foreign states and the interests of neighboring countries are only aggravating the situation and pushing the country to a permanent crisis. These alliances and clan games are not helping the dialogue process because each party wants to negotiate from a position of strength that stems from its occupation or control of land or certain territories.

Derna has become a special case and has proven yet again how easily Libya can fall into blind radicalism.

All the people in the city are threatened by the application of so-called Islamic laws. The threats are burdensome to the extent that hundreds of families have left Derna and headed toward other cities in eastern Libya. They entertain hopes of a possible UN intervention so that they can resume their normal lives.

Is a dialogue possible between Libyans in light of this anarchy?

Libya’s neighboring countries, including Tunisia, Egypt, Algeria, Niger and Chad, have been engaged in a marathon since 2014 in order to try to find a common ground between the different rival armed factions.

Algiers is preparing to host a round of mediation between several belligerents on the Libyan scene. The UAE and Italy are coordinating efforts to hold this meeting, which is also supported by Iran. What is behind the Libyan conflict to create such an international interest?

From Tehran to Algiers, calls for dialogue between various factions have been the choice of everyone, including the UN.

The upcoming meeting in Algiers aims at establishing, “A dialogue between the various Libyan political groups and movements, which is the only way out of the spiral of violence and instability in the country,” according to a spokeswoman for the Iranian Foreign Ministry.

The Iranian official expressed her hope to “see the Algiers dialogue contributing to the establishment of peace and stability in Libya and the entire region.”

Will the Algiers dialogue usher in a new era for Libya after efforts by Tunis, Rome and Madrid? The meeting plans to involve some people who are close to the influential Libyan diaspora.

However, if the forces close to the National Forces Alliances agree to include the diaspora, the Muslim Brotherhood and their allies would adhere to “the true revolutionary participants in the dialogue.”

The accusations by remnants of Gadhafi’s regime are warranted. Would negotiations in the Libyan town of Ghadames pave the way for a new balance in Libya, following the reversal of the situations in Syria and Iraq?

Talks under UN mediation have been underway between the Libyan parliament and political opposition figures in the border town of Ghadames so that Libya returns to the political process.

Bernardino Leon, special UN envoy to Libya, said that the self-proclaimed Islamic State (IS) is already operational in the country.

However, Leon’s warnings have been unheeded as the protagonists are standing their ground.

This impasse, according to the UN envoy, would serve the interests of IS, which seeks to or has already established a permanent base in Libya as the headquarters of its branch in North Africa for recruitment.

In Tunisia, there are great concerns about the return of Tunisians who went to Syria and Iraq, through Libya — a transit land, where the arms trade is going full throttle.

Our national security is threatened, beyond the world’s attention, especially during the elections that are scheduled to take place this month. The security forces have resumed an “anticipatory” approach to security in recent months, yet the fact remains that the threat is real this time. This pushes us to join hands with our Algerian neighbors to counter the danger of the Libyan armed militias.

In terms of the Libyan national dialogue, it is advisable that the “wise men” of Libya seize this opportunity for dialogue and think about the national interest of the country and the people rather than the tribal, clan and, especially, mafia affiliations.

Today, the only way for a return of stability would be through UN intervention, a goodwill mission. If not, through the African Union or an international force, to bring lasting peace and the establishment of solid security institutions.

This article was originally published here.
Security Situation
AllDerna
2014-10-20
activate
Previous Council of the European Union – Council conclusions on Libya
Next Sisi and Bashir to aid Libya against militias