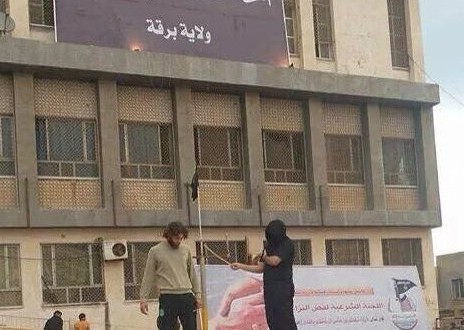 Following its declaration of allegiance to the Islamic State (or Daesh), Derna’s Shoura Council of Islamic Youth (SCIY), part of the local Ansar Al-Sharia structure, has moved to formally institute an Islamic Court in the town. 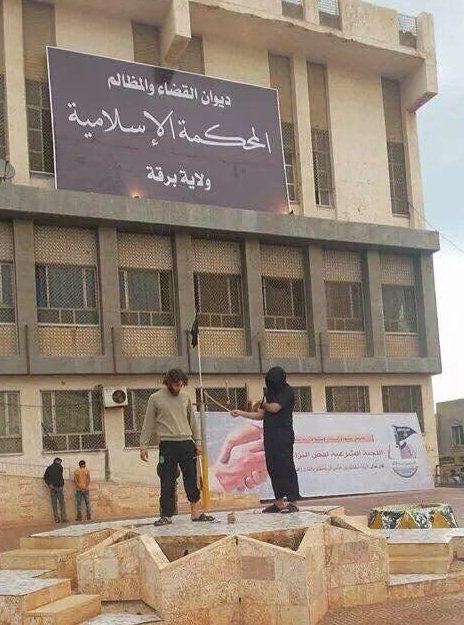 A Yemeni, variously named as Abu Al-Bara Al-Azadi or Abu Taleb Al-Jazrawi, is now said to head the court, housed in the public legal aid building next to the King Idris library. His assistant is said to be from Algeria. Over the weekend, it handed down a sentence of public flogging for a group of young men found guilty of alcohol abuse. The punishment was carried out on Saturday in the courtyard of the town’s old mosque.

In August, the SCIY carried out two public executions supposedly as a result of a Sharia court trial but illegal under Libyan law.

It is meanwhile reported that Jazrawi has met with education authorities in Derna to demand that they stop teaching foreign languages, physics, chemistry and biology. In August, a wall was built across one of the town’s university campuses to segregate male and female students.

As part of the new Sharia legal system, illuminated Islamic State signs can now be seen around the town. One of the police stations has a new sign up, reading “Islamic Police” in Arabic. Police vehicles too denote themselves as belonging to the Islamic Police.

There was an earlier move to set up an Islamic court in Derna. In May, SCIY took over the same building, formerly the Qaddafi regime’s People’s Committee offices, and announced it would be converted into an Islamic court. However, a few days later the sign on the building to that effect disappeared and nothing happened. At the time, a local official told the Libya Herald that there were problems because there were no qualified Sharia court judges in the country. They would have to be brought in from outside the country, he said. That issue now seems to have been dealt with.

Meanwhile, reports that Salem Derbi, commander of Derna’s Abu Sleem Martyrs Brigade, had fled to Turkey and requested asylum there have turned out to be untrue.

Derbi, who narrowly escaped an assassination attempt in July, has appeared on a video confirming that he is still in Derna and has no plans to leave.

Both he and his brigade have recently been involved in armed clashes against more Ansar Al-Sharia and the SCIY. His power, however, is said to be all but  gone. “The Abu Sleem Brigade has started to fizzle out,” a reliable Derna resident told this newspaper today, pointing out that Ansar Al-Sharia were now the undisputed masters of the town.

As for former Guantanamo inmate Sufian Ben Qumu whom many have seen as the leader of Ansar in Derna, he still had followers in the town “but not as many as Ansar” which, the source said, were busy recruiting teenagers to its ranks. In any event, he added, Ben Qumu was aligned with Al-Qaeda whereas the real leader of Ansar locally was Seraj Mohamed Ghafir.

In his 30s and from a wealthy local family, Ghafir, who had been prominent during the revolution and then turned the family farm into an Ansar camp, had also been busy recruiting locals to fight in Syria. Ghafir’s brother was killed there recently, the source added.