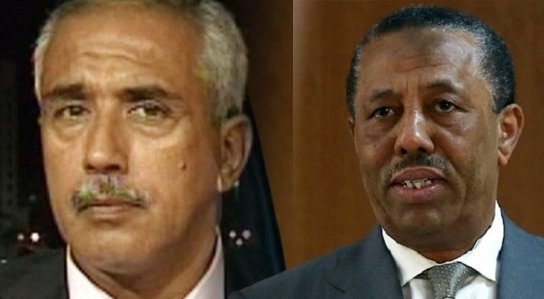 The so-called “National Salvation Government” of Omar Al-Hassi, based in Tripoli but rejected as illegal by the international community, has reached out to the Libya Herald in an effort to communicate its message to English-language readers and the international community. As a result, this newspaper agreed to interview Sliman Allagili, Economy Minister in the Hassi administration. This is the first interview by this publication of one of its members.

The Libya Herald was keen to discuss and understand at first hand with Sliman Allagili the position of the Al-Hassi National Salvation Government on issues of  its legitimacy and international recognition, democracy and the process of democratic and peaceful handover of power in post-revolution Libya.

However, Allagili preferred to concentrate on matters economic, saying that a detailed discussion on international recognition, legitimacy and democracy should be dealt with by other members of the Hassi administration.

Nevertheless, it was put to him that politics and economics were inextricably bound and that if his “ministry” and the so-called Government of National Salvation aspired to an economic programme, it needed to finance it. Without international recognition, it would be difficult to access Libya’s oil export revenues.

It was also pointed out that these revenues are deposited by Libya’s foreign oil buyers outside Libya, in the Libyan Foreign Bank, before being transferred to the account of the Central Bank of Libya (CBL), and that the international community or UN sanctions could block Libya’s oil export remittances to a Libyan government that was not internationally recognised.

The points were correct, said Allagili  Moreover, he admitted, his ministry and the Hassi government had no revenue to launch any new policies at present.

He summarised his answers to all the Libya Herald’s questions on international recognition, legitimacy and democracy in one answer: the awaited 5 November ruling by the Supreme Court on the constitutionality of the GNC-HoR handover process and the HoR’s subsequent sessions in Tobruk.

Allagili did not at any time question the results of the 25 June elections nor the general legitimacy of the HoR. Furthermore, by awaiting the Supreme Court 5 November verdict, and placing so much emphasis on it, he appeared to be implicitly recognising the principle of the rule of law as well as the political process of power transfer.

Given the Surpreme Court’s past reluctance to make a ruling on the issue of the legitimacy of the HoR’s sessions in Tobruk, it is far from assured that it will now do so next Wednesday.  Nor it is clear, whenever that verdict is delivered, how it will be accepted by either side.

As regards the lack of funds for the National Salvation Government, Allagili nevertheless insisted that both the CBL and the Audit Bureau were neutral in the current power struggle between the anti- and pro-HoR forces — a view that is not fully accepted elsewhere in Libya.

The CBL had said that it would not allow funds to go to the Thinni government pending a court decision on its legality. However, there have been persistent but unproven allegations that officials loyal to Saddek Elkaber, who was sacked as its governor last month by the Thinni government but is still regarded as being in post by Hassi, have tried to channel funds to the Tripoli-based administration.

With regards to economic policy, Allagili was keen to stress that his “government” had carried out subsidy reform by substituting the subsidy of goods with cash payments. These would be paid directly into the bank accounts of household heads based on the National ID Number, Allagili explained.

The reform would also be an opportunity at consumption awareness of Libyans, he said, adding that the Libyan business community fully supported reform subsidy on the basis that it was good for the market, the economy and competitiveness.

His claim about the subsidy does not, however, wholly ring true.  Subsidy substitution was backed by the Ali Zeidan government and officially endorsed by the former General National Congress when it passed its version of the 2014 budget during Abdullah Thinni’s first government last July.  There is no evidence so far of it being implemented by either his new adminisation or by the Hassi one.

Human Resource and youth are Libya’s most important asset

Looking ahead, Allagili felt that Libya’s most important asset was its human resources and its youth. They were far more important than the country’s oil, he stressed .Seventy percent of Libya’s population was was comprised of young people, he explained.

Moreover, he added, the education system was the key to activating Libya’s youth. At present, however, it was failing them. That was where much investment had to be directed.

JusticePolitical Transition
All
2014-10-31
activate
Previous Libya debates dialogue as bloodshed continues
Next Libya: Is Military Intervention in Libya the Answer?