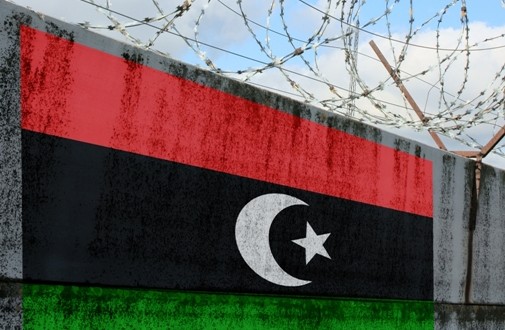 Libya: Evidence of New Landmine Use in Tripoli

(Tripoli) – Credible evidence has emerged showing that one or more militia groups have used antipersonnel landmines during the armed conflict involving a Zintan alliance and the Libya Dawn alliance at Tripoli Airport in July and August 2014.

Human Rights Watch was unable to determine which groups were responsible for laying the mines and urged Libya Dawn, which now controls Tripoli Airport, to destroy remaining stockpiles and ensure mine clearance according to international standards.

“The use of antipersonnel landmines by any party anywhere is unacceptable,” said Steve Goose, arms director at Human Rights Watch and chair of the International Campaign to Ban Landmines, the Nobel Peace Co-Laureate. “All parties should order their forces to stop using landmines and destroy any stocks immediately.”

Libya is not a party to the 1997 Mine Ban Treaty, which comprehensively bans antipersonnel mines. For nations that are not parties to the treaty, the use of antipersonnel mines violates customary international law, because the weapons are inherently indiscriminate and cause disproportionate long-term harm to civilians. Use of antivehicle mines can also violate international law, notably when forces use them indiscriminately or to target civilians, or when they do not take adequate precautions to avoid civilian casualties.

Alnabaa – a private Libyan satellite TV network – and Al Jazeera aired video footage they say was filmed in September at Tripoli International Airport that shows Libya Dawn fighters clearing at least 20 T-AB-1 antipersonnel mines and at least 1 PRB M3 antivehicle mine. The mines were allegedly laid during fighting between forces of the Libya Dawn alliance, led by militias from the coastal city of Misrata, and a coalition of militias from the inland mountain town of Zintan.

The Zintan alliance, which included the Qaaqaa, Sawaeq and Madani brigades, controlled Tripoli airport from the end of 2011 until August 24, when Libya Dawn seized control after five weeks ofintense fighting. At the time of fighting, a Zintani unit known as the Airport Security brigade controlled the airport and its vicinity.

A senior United Nations Mine Action Service (UNMAS) official in Libya informed Human Rights Watch on November 1 that the UN has no “confirmed information” on the mine use at Tripoli Airport. Representatives of international mine action operators working in Libya told Human Rights Watch that they could not comment on the use of mines at Tripoli Airport as their staff have not been able to access the site.

On October 29, Human Rights Watch spoke by telephone with the commander of the Misrata Revolutionaries engineering unit within the Libya Dawn alliance, which has been responsible for clearing landmines and other unexploded ordnance in Tripoli since August. The commander said his unit on August 24, the day of the airport takeover, had discovered a mined area of the airport. He said a pickup truck mounted with anti-aircraft weapons entered the “old airport area” and detonated a mine, killing one fighter from the Misrata Umm al-Maarek brigade, Mohamed Abubaker Ali, and wounding several others.

The T-AB-1 antipersonnel mines are believed to be of Brazilian origin, but lack specific factory markings. Pro-Gaddafi forces also extensively used this type of mine during the 2011 conflict.

PRB-M3 antivehicle mines can be equipped with a sensitive fuze that can cause them to explode by a person’s presence, proximity, or contact, posing a risk to civilians on foot as well as in vehicles. When used with a sensitive fuze, the PRB-M3 meets the definition of an antipersonnel mine under the Mine Ban Treaty. Another variant of the PRB-M3 mine, equipped with an auxiliary fuze and an anti-handling device, can be fitted to the mine so that it will explode if anyone tries to move it.

Both types of mines consist almost entirely of plastic, making them extremely difficult for deminers to detect with metal detectors, and endangering people trying to clear the mines.

The Libya Dawn commander, a retired officer in charge of the engineering unit since the 2011 revolution, told Human Rights Watch that he believes the mines were laid at the “old airport area” in an indiscriminate manner about 10 to 15 days before the August 24 takeover of the airport. He accused militias from Zintan, which were in charge of the airport in this period, of having laid the mines. The “old airport area” was not known to be mined prior to the 2014 fighting.

In a telephone interview with Human Rights Watch, the mayor of Zintan, Mustafa al-Barouni, denied that the Zintan-led militias had used antipersonnel or antivehicle mines. Al-Barouni said the Airport Security brigade was at the airport at the time of the fighting, together with people who helped “defend the airport.”

During the 2011 revolution, government forces under then-leader Muammar Gaddafi used five types of landmines in six locations while another three types of mines were found abandoned at several locations. No landmine use was recorded by opposition forces after April 2011, when the then-opposition National Transitional Council (NTC) issued a formal pledge to not use antipersonnel and antivehicle landmines, and to destroy all mines in its forces’ possession. The 2011 pledge was signed by military leaders including General Khalifa Hifter, now commander of Libya Dignity, which is allied with the Zintan-led militias that controlled the airport until it was taken by Libya Dawn.

When the Gaddafi government progressively lost control of the country in 2011, anti-government forces and civilians gained access to massive weapons depots containing hundreds of thousands of landmines. Since 2011, local and international mine action organizations have worked with Libyan authorities and the United Nations to collect and destroy ordnance as well as clear mines, but the work is far from complete. Human Rights Watch witnessed the destruction of some stockpiled landmines in 2012, but does not believe there has been any systematic or coordinated stockpile destruction effort.

Under Gaddafi, Libya defended the use of antipersonnel mines and refused to join the Mine Ban Treaty, but in 2011 the National Transitional Council said that “Any future Libyan government should relinquish landmines and join the 1997 Mine Ban Treaty.” But it did not carry out the pledge to join the treaty when it became the interim government.

A total of 162 countries have joined the Mine Ban Treaty, most recently Oman on August 20. The treaty comprehensively prohibits antipersonnel landmines and requires their clearance and assistance to victims. Due to the stigma against antipersonnel landmines that the treaty has established, use of the weapons by governments or non-state armed groups is rare.

All parties to the conflicts in Libya are required to abide by the laws of war. Certain serious violations of the laws of war, when committed with criminal intent, are war crimes. Those who commit, order, assist, or have command responsibility for war crimes are subject to prosecution by domestic courts or the International Criminal Court (ICC), which has jurisdiction over war crimes, crimes against humanity, and genocide committed in Libya since February 15, 2011, under United Nations Security Council resolution 1970.

On August 27, the United Nations Security Council passed resolution 2174 (2014) broadening the existing international sanctions on Libya to include people who engage in or support acts that “threaten the peace, stability or security of Libya, or obstruct or undermine the successful completion of its political transition.” Such acts include “planning, directing, or committing, acts that violate applicable international human rights law or international humanitarian law, or acts that constitute human rights abuses.”

Libya is also affected by landmines used extensively during World War II desert battles. In addition, Libya used landmines during its conflict with Chad and placed mines along other parts of its borders at various times. Some facilities have minefields laid around their perimeter, including certain ammunition storage sites.

Brazil is a state party to the Mine Ban Treaty and has not manufactured or exported antipersonnel landmines since 1989. In December 2011, Brazil condemned landmine use in Libya and pledged to make a financial contribution to Libya’s mine action program.