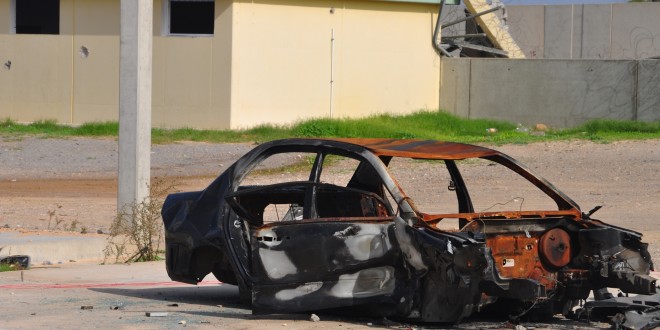 The Egyptian and UAE embassies in Tripoli have been damaged in bomb attacks very early this morning. Car bombs exploded at much the same time outside the walls of the Egyptian embassy on the Corniche, a stone’s throw from the Italian embassy and the Waddan Hotel, and outside the UAE’s premises in Siyahiya in west Tripoli. No one was hurt in either attack because of the timing and also because both embassies are closed.

The explosions follow those yesterday in Tobruk, Beida and Benghazi in which five people were killed.

It is not known who was responsible for any of the attacks – yesterday’s or today’s – but Libyan military analyst Mohamed Al-Naas, speaking on An-Nabaa TV last night, said that yesterday’s attacks were the work of “revolutionaries” opposed to Hafter. Said to be a supporter of Libya Dawn, Naas said they had the right to do so.

Both Egypt and the UAE have been accused by Libya Dawn and Omar Al-Hassi’s team of providing military support to Hafter in the east and targeting Libya Dawn forces in the west, claims that both countries have denied.

Following the accusations, the Egyptian embassy was sacked and looted last month, allegedly by militiamen belonging to Misratan and Suq Al-Juma units.

A bomb exploded outside the Egyptian consulate in Benghazi in August last year.

Until now the only other bomb attack on an embassy since the revolution was that against the French embassy in April last year. It was believed to have been carried out by Islamists angry at France’s intervention in Mali.

Attacks on embassies were similarly used as a political tool by the Qaddafi regime during the revolution. The UAE embassy, along with those of Qatar, the UK and Italy were set on fire by Qaddafi supporters.