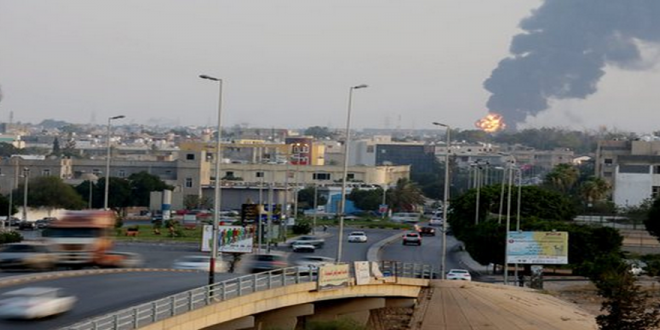 Benghazi residents are trying to restore normal life to their city in the areas liberated by the Libyan army.

Residents started holding festivals in various areas to amuse children and adults after they suffered in the war against the terrorists.

Playing fields and schools were used for holding sports competitions and for setting up children’s toys in Ben Younis, Sidi Hussein, Ashreen and al-Baraka streets.

The Libyan Red Crescent Society is playing an important role in organising these festivals and helping the city return to normal life. This is in addition to its relentless efforts and the risks that its staff members face in their relief work, including the recovery of bodies.

As part of the activities carried out by the society’s psychological support team, a support programme was organised on Tuesday (December 16th) at al-Hasan Ibn al-Haitham School in Ras Obeida area, attracting many families.

The programme targeted children and their parents, with the latter taking part in contests and activities, as part of efforts to help families, especially children, get rid of psychological pressures.

“The programme targets elementary school pupils who couldn’t go to school due to the current conditions. The programme will run for 10 days, and will be staffed by competent teachers. The goal of the programme is to prepare students for the next school year and revise past lessons,” the Red Crescent wrote on Facebook.

Youths also started cleaning their streets and removing the remnants of war with the help of the Environment Protection Agency. They also painted sidewalks and decorated squares in an attempt to wipe out the manifestations of destruction in their war-ravaged city.

In other areas, such as al-Salam, Budazirah and the Sidi Khalifa neighbourhoods in eastern Benghazi, life has returned to normal. These areas are witnessing traffic congestions because shoppers are focusing on them now that the northern parts of the city – including Souk al-Hoat and al-Sabri, which are usually more crowded – are closed because the army is besieging the terrorists there.

Even traffic policemen have returned to some streets now that relative security has been restored to several areas. Policemen had stopped going to work because extremists were targeting and killing them.

“In spite of the tough and confusing conditions, we have to cling to hope and we have to work,” 26-year-old female scout Heba Hussein said on the official scout Facebook page.

“The city has seen some movement, although slow, from civil society and security agencies,” said journalist Ali al-Warfalli. “For the last two months, security and service presence in town has been restricted to the army.”

“The city and its residents don’t need festivals; we need a municipal council and ministries that take the initiative,” al-Warfalli added. “People need services, including banks, wholesale markets, shops, and safe passages for al-Sabri area residents so they can at least evacuate their belongings.”

“Of course, things started to improve a bit, but I mean that the response of city and residents to the return of normal life was faster than that of state agencies,” he concluded.