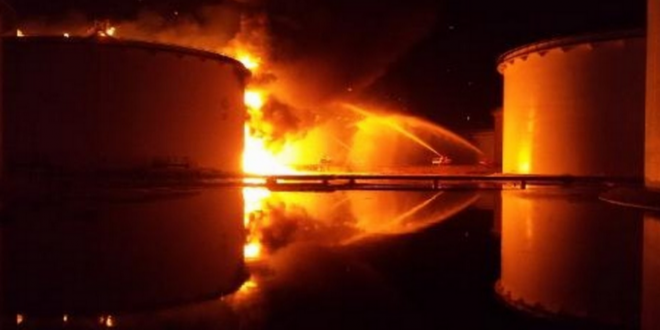 Omar Al-Sinki, the Minister of the Interior, has called for international help to extinguish the fire at the Sidra Oil Terminal which is spreading. Five tanks are now said to be ablaze.

Sinki is said to have specifically asked for Italian and American help; the terminal is operated by Waha Oil, a joint venture between the National Oil Corporation and a number of US oil companies. However, they are reported to be reluctant to intervene at present because of fears of further attacks.

Local firefighting teams are said to be having great difficulty coping with the fire which started two days ago when a missile hit one of the holding tanks during a land and sea attack on the terminal by Libya Dawn’s Operation Sunrise. The conflagration spread yesterday to two further tanks, two more today and there are fears that others could be set ablaze.