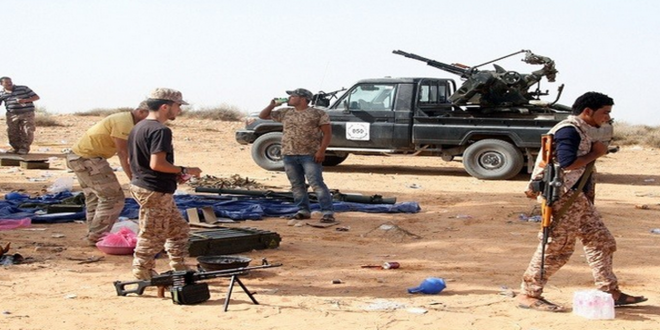 Forces loyal to Libya’s internationally recognized government on Sunday carried out airstrikes against the country’s militia-held third city of Misrata for the first time, a spokesman said.

Colonel Ahmed Mesmari said the raids were a response to a renewed attempt early Sunday by the Fajr Libya (Libya Dawn) militia to seize the key al-Sidra oil export terminal.

Residents said the strikes targeted a flying school close to Misrata airport, the port and a steel plant. There were no immediate reports of casualties.

Mesmari said the strikes took place after Fajr Libya launched an air raid on al-Sidra using a Mig-23 jet that took off from the aviation school in Misrata.

“That is why we targeted it and other positions of the militia,” he said.

Fajr Libya has been trying to take al-Sidra and the nearby Ras Lanuf terminal since Thursday. Militants launched attacks on Sirte and Sidra port by firing rockets from speedboats, setting seven oil tank on fire.

On Sunday firefighters managed to extinguish four of the fires, an oil official said, adding that blazes still raged in three tanks.

On Thursday’s attack 18 soldiers and a Fajr Libya militant were killed in Sirte, and another four soldiers were slain in Sidra.

Almost four years after a NATO-backed war ended Muammar Gaddafi’s one-man rule in 2011, Libya is struggling with instability as two rival administrations compete for power and warring armed factions skirmish for control of territory across the North African state.

In August, Abdullah al-Thani and his cabinet were forced to leave Tripoli for the remote east when militants from Fajr Libya seized the capital. The new rulers of Tripoli have set up their own administration, the General National Congress (GNC), which has not been recognized by the United Nations and world powers.

Meanwhile, the UN mission in Libya, UNSMIL, on Sunday issued a statement condemning the airstrikes, warning that failure to take steps “towards de-escalation” will lead to “all-out war” in Libya.

Elsewhere, a Tripoli court on Sunday delayed yet again the trial of some 40 members of Gaddafi’s ousted regime, including his son Seif al-Islam, a judicial source said.

Seif al-Islam was not present as he has been held since his capture by rebels in November 2011 in the hilltop town of Zintan, west of Tripoli.

So far, Zintan rebels have refused to have him transferred to the capital, despite a request from Libya’s prosecutor general.

Human Rights Watch called on Libyan authorities last February to provide proper defense counsel to Saif and his co-defendants to ensure they receive a fair trial.

The New York-based watchdog said that during visits by its staff, both Saif and former spy chief Abdullah Senussi had complained they had no representation at all during interrogations and pre-trial hearings in their prosecution for gross abuses during the uprising.

Seif, 42, is wanted by the International Criminal Court (ICC) on charges of crimes against humanity relating to the bloody repression of the 2011 uprising.

A new hearing in the case of the 40 is due to take place on January 11, when defense lawyers are due to speak.

However, ICC’s chances of pursuing perpetrators are far from certain as in 12 years of operation, it has secured just three convictions.