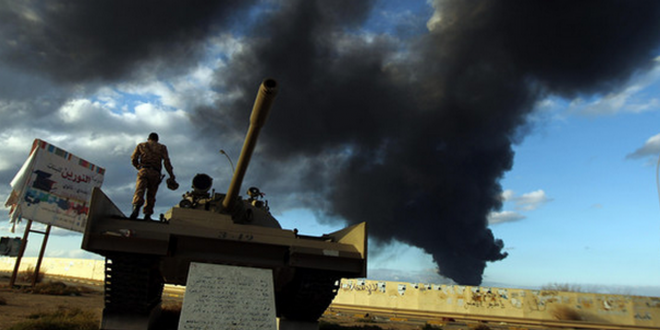 The price of crude oil has risen on international markets, following air strikes by forces loyal to Libya’s internationally recognised government against Islamist militias as the battle to control oil resources intensifies.

Oil prices have risen on Monday on the back of air strikes carried out against the militia-held third city of Misrata.

Forces loyal to Libya’s internationally recognised government carried out their first air strikes against Misrata on Sunday, a spokesman said.

Colonel Ahmed Mesmari said the strikes were in response to a renewed attempt by the Fajr Libya (Libya Dawn) militia on Sunday morning to seize the key Al-Sidra oil export terminal. Residents said the air strikes hit the school of aviation close to Misrata airport, the port and a steel plant.

There were no immediate reports of casualties.

Oil prices in Asia rose on the back of the violence in Libya, with fears it could disrupt supply.

Fajr Libya has been attempting to take Al-Sidra and the nearby Ras Lanuf terminal since Thursday when it killed at least 22 soldiers in a surprise attack by speedboat.

Seven of the 19 oil tanks at Al-Sidra were ablaze on Sunday as a result of the fighting, an oil official said.

The fire started in two tanks and then spread to the rest, according to Mashallah al-Zawi, the oil minister in the rebel government, said to al-Araby al-Jadeed.

He added that his government were struggling to deal with the fire, “as our resources are limited”.

Since clashes first erupted around the export terminals on December 13, Libya’s oil production has dropped to less than 350,000 barrels per day compared with 800,000 previously, according to industry experts.

More than three years after dictator Muammar Gaddafi was toppled and killed in a NATO-backed revolt, Libya is awash with weapons and powerful militias, and has rival parliaments as well as governments.

As well as Misrata, the capital Tripoli and second city Benghazi are largely in the hands of militia and the internationally recognised government has taken refuge in the remote east.

Libya’s foreign minister in the internationally recognised government had earlier said that “extremist groups” are escalating their attacks in his country, including a renewed push to control oil resources.

Mohamed Dayri, speaking Sunday in Cairo, called for concerted international efforts to stem the flow of money and weapons to them and described the clashes as a serious escalation.

Dayri called the clashes a serious escalation. He said troops loyal to his government hope to fend off the attack, in which militant groups are involved.

The attack on the terminal began Thursday when a rocket targeting the terminal was fired by militiamen from Fajr Libya. One oil tank was hit, said the region’s security spokesman Ali al-Hassi, before the fire spread on Friday to two other full tanks at Al-Sidra terminal.

The rebels have been pushing to seize oil facilities, as part of their “al-Shorouk” campaign.

On Saturday the flames engulfed another two storage tanks at Al-Sidra, which is in the eastern region known as the “oil crescent” and home to other key terminals, he said.

The United Nations Support Mission in Libya (UNSMIL) said in a statement on Saturday that it “strongly condemns” attacks on Libya’s oil installations.

Hassi said the national fire department refused to extinguish the fires, prompting volunteer firefighters to come forward to fight the flames with the help of oil installation guards.

“They are doing their best to extinguish the fire and are working under difficult conditions,” Hassi said.

A technician for Waha, the company responsible for running Al-Sidra, said there are 19 storage tanks at the terminal with a total capacity of 6.2 million barrels of oil.

The source, who declined to be named, estimated the amount of crude lost to the fire so far at more than 1.6 million barrels.

‘A hub for terrorists’

Upping the rhetoric, France warned Sunday that southern Libya is fast becoming a ‘hub’ for terrorists.

The country’s defence minister Jean-Yves Le Drian told the Le Journal Du Dimanche that local militiamen have joined forces with their erstwhile enemies linked to al-Qaeda affiliated armed groups. He warned that the presence of such groups so close to the Mediterranean represented a threat to the national security of France. He added that in 2015 the United Nations and the African Union must confront this in 2015.

The United Nations envoy to Libya. Chadian Ambassador Mohamad Cherif had earlier said that talks among Libya’s rival groups are set to take place on 5 January, after agreement was reached on a road map toward calming a conflict that has split the country.

Libya now has two governments, one that is internationally recognised and another backed by Islamist and Amazigh militias. The U.N. has warned that the violent chaos threatens the region’s stability.

Cherif says the council urges the parties to accept an immediate cease-fire, and it is concerned about the flow of arms into Libya despite an arms embargo.

The U.N. says the fighting has killed hundreds of civilians and could lead to prosecution for war crimes.

Elsewhere, a Tripoli court on Sunday delayed yet again the trial of some 40 members of Gaddahi’s ousted regime, including his son Saif al-Islam, a judicial source said.

Saif al-Islam was not present as he has been held since his capture by rebels in November 2011 in the hilltop town of Zintan, west of Tripoli.

Saif, 42, is wanted by the International Criminal Court (ICC) on charges of crimes against humanity relating to the bloody repression of the 2011 uprising.

A new hearing in the case of the 40 is due to take place on January 11, when defence lawyers are due to speak.