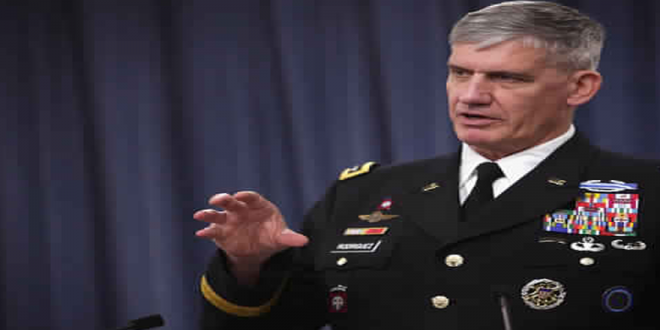 Islamic State has training camps in Libya, warns US commander

The Islamic State group has set up training camps in eastern Libya, a top US general has said, intensifying fears that the jihadists are extending their reach through North Africa.

Army Gen. David Rodriguez, who heads US Africa Command, has told reporters that there may be “a couple of hundred” fighters undergoing training at the sites, but ruled out military action on the “nascent” camps in the near future.

Since declaring a caliphate straddling the Syrian and Iraqi border, the Islamic State of Iraq and the Levant (Isil) has boasted of alliances with groups in Libya, Egypt, Algeria and Yemen.

Western officials had expressed concern that extremists would find fertile ground in the nations that endured the hope and despair that accompanied the Arab Spring and its aftermath. Since the overthrow of Libya’s longtime dictator Muammar Gaddafi, the oil-rich nation has been riven with political divisions and is now governed by rival governments and a patchwork of overlapping militias.

In Egypt, militants gained a foothold after the overthrow of Muslim Brotherhood president Mohamed Morsi, exploiting the revenge sentiments of young Islamists, as well as the marginalisation of communities living in the eastern and western borderlands.

Gen. Rodriguez warned that Libya’s trainees appeared to be members of local militias who were “trying to make a name or trying to make a connection.” It was unclear whether they might join Isil fighters elsewhere once their training was complete, he said.

“It’s mainly about people coming for training and logistics support right now,” Gen. Rodriguez said. “As far as a huge command and control network, have not seen that yet.”

Last month, militants in the Mediterranean coastal city of Derna in Libya swore allegiance to Isil in a night-time ceremony, becoming the first city outside of Iraq and Syria to publicly join the “caliphate”.

According to news reports, a number of leading Isil militants travelled to Derna earlier in the year, where they helped unite a panoply of once-divided extremist factions behind them.

The militants have joined other armed militias in unleashing what Human Rights Watch have described as a “reign of terror” across the city, involving apparent summary executions and public floggings.

The emergence of militant training camps in eastern Libya has been watched closely by neighbouring Egypt, which is dealing with an Isil affiliate of its own.

Operating mostly in the eastern North Sinai province, Ansar Bayt al-Maqdis (ABM) is understood to have pledged allegiance to Isil as early as July, although it made no public statement on the matter until November 10.

Isil are now encouraging would-be jihadists to travel to North Sinai, despite the area being on de-facto military lockdown.

“O Muslim youths, hurry to consolidate the Islamic caliphate’s province in Egypt starting from Sinai,” wrote one jihadist, calling himself Abu Musab al Gharib, in an article posted to Twitter this week. He argued the establishment of the Isil’s Sinai province will lead to the unification of jihadists across Libya, Egypt, and the wider region.

To date, ABM has focused mainly on domestic targets, killing hundreds of Egyptian policemen and soldiers. The group is unlikely to gain much traction with the wider Egyptian population – many still remember the fear that accompanied militant violence throughout the 1990s.

Back in Syria, Isil militants attacked a major military airbase on Wednesday night in what looked to be a push to eliminate the last significant government outpost in the extremist-dominated eastern region.

The airfield just outside the city of Deir el-Zour is a key military facility for President Bashar Assad, giving his warplanes a hub from which to bomb Isil-held areas across much of eastern Syria. Capturing the airport would eliminate the key pocket of resistance and provide a major morale and propaganda boost after a string of setbacks in recent weeks.