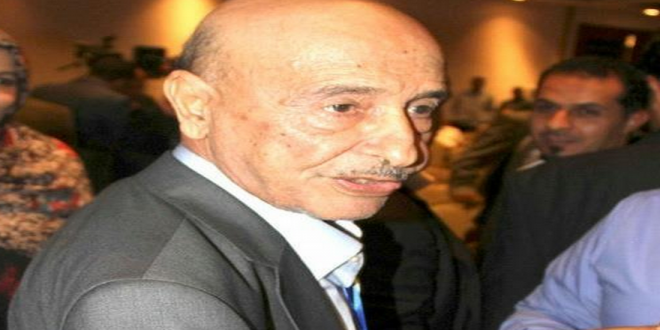 Libya’s House of Representatives President Ageela Salah said that there cannot be a military solution to Libya’s current crises.
Speaking on Sky News Arabia yesterday ahead of the Arab League meeting on Libya, Salah said that Libyan social and tribal support was necessary for a solution.
On the postponement of the planned UN-brokered talks with Libya Dawn, Salah said they were postponed because an agreement could not be reached on the location of the talks. He added that the location had to be within Libya.

Salah said he welcomed the talks and that dialogue was necessary for the country to exit from its crises.

Salah said that Libya did not need foreign intervention on the ground but needed arms and support. Asked why the Libyan National Army (LNA) was still unable to overcome the extremists in Benghazi, Salah said that the LNA will be able to overcome them, but that the few extremists were hiding in buildings and using civilians as shields. The LNA, on the other hand, had to take the safety of civilians into account in their operations, he added.

On the HoR reinstating military officers barred by the GNC, Salah said that the GNC had removed them in order to prevent the formation of an army and that the HoR wanted to build a strong army. On the appointment of the new Chief of Staff of the Libyan army, Salah said that the HoR will make the final decision as well as as to who is Defence Minister. The appointment will be a political as opposed to a military decision , he added.

On the HoR air raids against Misrata and Maetiga airport, Salah said they had to take action and defend against Libya Dawn attacks on the oil storage tanks and prevent attacks from being launched from Misrata and Maetiga as well as arms being shipped to the two airports.

Salah stressed that not all Misratans supported extremists and called on tribal leaders to meet and play a role.

On recent meetings with Egypt, Salah said that Libya was asking for support including in the supply of electricity and joint border monitoring. Egypt and Libya’s security were one, he stressed.

On the surprise visit to Qatar by Libya’s HoR Foreign Minister, Salah said that contact was made in New York. He said that Qatar had stood by Libya during the 2011 revolution, but later started to support certain groups. He said that Libya asked Qatar to support legitimacy.

Turkey had also promised to in New York to improve relations, but they had not improved to the level he would like yet.

Salah confirmed that Libya’s southern borders were open for all armed groups and agreed that France seemed to be more keen on fighting terrorism. However to reference to alleged French intention to carryout operations in southern Libya, Salah said Libya did not support any transgression of its sovereignty.

With regards to all of Libya’s neighbouring states, Salah said that Libya would like cooperation in fighting arms smugglers and extremists.

As to the international community, Salah that whilst it stood by Libya in 2011, it had abandoned since. He asked that they supported legitimacy and not equate between the legitimate and illegitimate parties. Salah said Libya needed their support with in preventing the entry of weapons into Libya as well as the building of the Libyan National Army.

On the poor performance of the Abdullah Thinni government, Salah said that his government had to be judged in view of the circumstances it finds itself in .