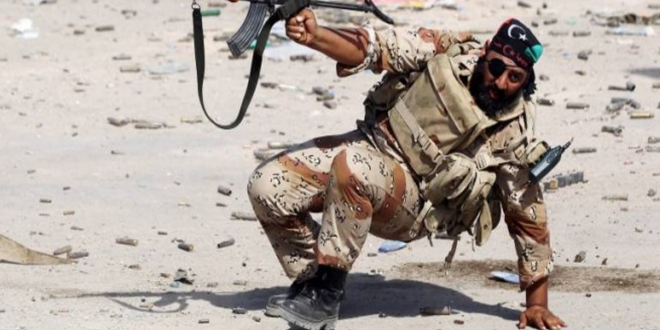 The Libyan government wants the world to lift the arms embargo in place since 2011.

Speaking Monday (January 5th) at an emergency meeting of the Arab League in Cairo, Libya’s representative asked the “international community to assume its legal and moral responsibilities, and to arm, without further delay, the Libyan army”.

Ashur Bou Rashed called for assistance securing a “military victory over the brutal militias, to prevent them from further expanding their influence across Libya”.

“In spite of military progress made on the ground, the current capabilities of the Libyan army may not be enough to resolve the battle once and for all in favour of legitimacy, given the current arms embargo,” he said.

“The longer a military victory over the brutal militias is delayed, the more they will expand, and the more you reduce the chances of finding a political solution,” Bou Rashed added.

The president of Libya’s House of Representatives, Aguila Saleh Issa, also addressed the need for outside aid.

“What Libya is now requesting of neighbouring countries is to protect borders against the smuggling of arms and infiltration of extremists,” he said.

“We’re officially asking the Arab League to intervene to protect Libya’s vital facilities, prevent armed terrorist militias from using violence and violating sanctities, to help restore normal life to the Libyan people, assisting them in building their institutions, restoring stability and establishing the state of law,” the parliamentary president added.

Saleh Issa noted, however, that the government did not want foreign military intervention.

In its closing communiqué Monday, the Arab League Council stressed the need to isolate terror groups and support Libya’s army, police and legitimate institutions, in order to restore security in the country and safeguard its neighbours.

The body said the only solution to the crisis was a comprehensive national dialogue among all Libyan parties.

For his part, the secretary-general of the Arab League Nabil al-Arabi, expressed “regret” over the unsuccessful efforts to launch a dialogue between the parties in conflict in Libya, AFP reported. A dialogue meeting scheduled for Monday under the aegis of the UN has been postponed indefinitely.