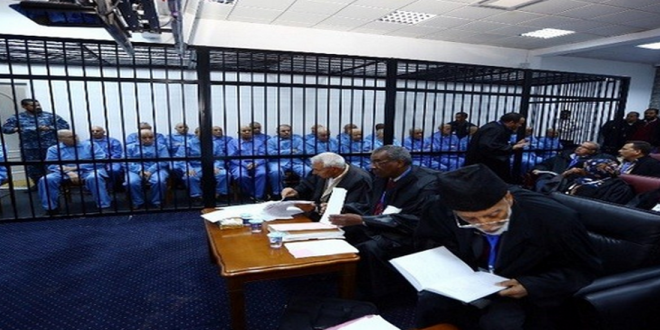 The long-running postponement saga of the Tripoli trial of top regime figures continued yesterday when the latest hearing was opened and adjourned until 25 January.

The accused included Saif Al-Islam Qaddafi and 36 other senior officials of the former regime, including the once-feared former security chief Abdullah Senussi.  Last year they appeared seven times in the special court room in Habda prison where they are all confined, with the exception of Saif Islam. On each occasion the hearings were put back. In the main, the delays were requested by defence lawyers who wished more time to prepare their cases.

However since fighting broke out in August, a number of defence lawyers has failed to turn up and been fined LD 50 by the court. There have also been problems gathering both prosecution and defence witnesses.

Last year Saif Islam appeared in the courtroom via a video link from Zintan where he is being held. Yesterday, as at the two previous hearings, there was no video feed to bring the man who was once Qaddafi’s heir apparent into the court room. As before, technical problems were cited, though it is assumed that since they were ejected from theTripoli and their stronghold at the now-destroyed international airport, the Zintanis are refusing to take part in the proceedings.

The case against the accused opened in 2012. They are variously accused of genocide, killing of unarmed civilians, abuses of power, human rights abuses, employing mercenaries and encouraging rape as a weapon of war. If found guilty many of the defendants face the death penalty.