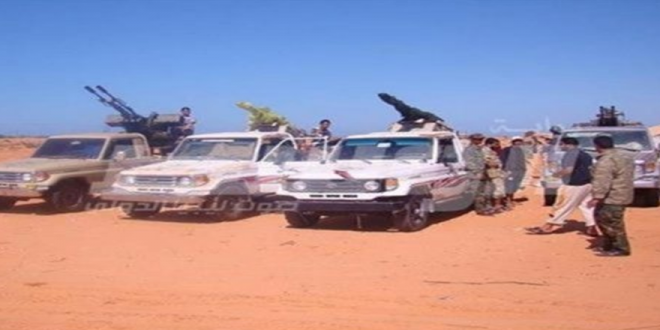 Libya the key to stopping terror in the Sahel

Madama, located in the northeast of Niger in the vast Teneré desert, is 10 days’ drive from the capital Niamey and doesn’t even feature on most maps. This is where Jean-Yves Le Drian, French Minister of Defence, spent the first day of 2015 visiting troops in a brand new military base, which is being set up as part of France’s Operation Barkhane to fight Islamist terror groups in the Sahel.

What makes the town significant is its proximity to the Libyan border, which is less than 100km away. Le Drian’s surprise visit, which followed a New Year’s Eve celebration with the soldiers at the French base in N’Djamena, Chad, is a clear indication of France’s readiness to attack Islamic groups that are using southern Libya as a base to regroup and re-arm. But will France cross the border and intervene militarily in the country?

The question of stabilising Libya was the elephant in the room during a two-day high-level meeting on security held in Dakar, Senegal, in mid-December. Participants at the Dakar Forum, including heads of state from Senegal, Mali, Chad and Mauritania agreed that to stop terrorism in the Sahel something has to be done about the crisis in Libya, which has a spillover effect in the entire region. Libya now effectively has two parliaments and scores of militias are fighting it out for control of the capital, Tripoli, and the country’s lucrative oil fields. The crisis is, of course, the fall-out from the Nato intervention to oust former strongman Muammar Gaddafi in 2011.

At the Dakar Forum, co-organised by the French government and Senegal, heads of state openly accused France and Nato of not taking into account the consequences for the Sahel of its military action to halt the advance of Gaddafi’s forces on Benghazi.

‘The West didn’t ask us our opinion when they attacked Libya,’ Chad’s President Idriss Déby told Le Drian during the closing ceremony of the Forum. ‘They achieved what they wanted; the destruction of Libya, the death of Gaddafi,’ he said. According to Déby, Nato created the chaos in Libya and should now clean up the mess. While the 2011 intervention was justified by France and Nato forces as ‘responsibility to protect,’ Africans are insisting on ‘responsibility to rebuild’.

Various voices in the region now favour military intervention in Libya as an important short-term measure to curb cross-border infiltration of Islamists from southern Libya, if not to solve the political crisis. During Le Drian’s visit to Niger, the country’s President Mahamadou Issoufou also told the minister that he was in favour of much greater international involvement to solve the crisis in Libya, saying it is ‘crucial for the reconciliation between all Libyans.’

Analysts, however, have argued that renewed intervention could backfire, especially within the context of a general breakdown in the rule of law and the proliferation of weapons in the country. Several thousand Libyans are also said to have joined the Islamic State of Iraq and Syria (ISIS), and Western military intervention could again play into the hands of extremists.

In the debate over what to do in Libya, it is crucial that the African Union (AU) is not sidelined, as it was in 2011. Smaïl Chergui, AU Commissioner for Peace and Security, was one of the main speakers at the opening session of the Dakar Forum, where he pointedly spoke about the ‘excellent coordination’ between the AU, the United Nations (UN) and theEconomic Community of West African States in handling the recent crisis in Burkina Faso.

When journalists asked Le Drian at the Forum whether, in light of the AU’s strong opposition against the 2011 intervention, France is now coordinating with the AU, he confirmed that there is ‘constant consultation’ between France and the AU on this issue. Yet in subsequent discussions and statements on Libya in Dakar, mention was only made of the initiatives to get peace talks going by Bernardino León, UN Special Representative for Libya. Not a word about the AU efforts.

Like the UN, the AU last year appointed a special representative for Libya, Dileita Mohamed Dileita, who has been travelling to the country and briefing the AU’s Peace and Security Council (PSC). On 15 November Dileita again reiterated the AU’s opposition to military intervention. Meanwhile, at its last meeting on Libya in September, the PSC recommended that an international contact group for Libya be established and endorsed the setting up of a high level committee of heads of state.

The AU’s own plans for Libya, however, are not getting the publicity they deserve. Perhaps this will change when the continent’s media gather at the AU summit, which is set to take place in Addis Ababa later this month, where Libya is likely to be high on the agenda.

France is only one of a number of countries that could be tempted to take unilateral action. In August last year, Egypt and the United Arab Emirates (UAE) reportedly carried out air strikes against the Islamists and in support of the renegade general Khalifa Haftar. Turkey, on the other hand, is accused of helping the Islamists.

Once again the Arab League is deeply involved in the crisis in Libya; understandably so, given the vested interest of several of its members. The League has discussed Libya several times and held an emergency meeting on Libya in Cairo on 5 January. Africans may monitor developments carefully to see if the Arab League will again be the main interlocutor of the Europeans over what to do in Libya, at the expense of the AU, as was the case in 2011.

Earlier, French president François Hollande said that France would seek intervention only when ‘asked’ to do so and following a UN resolution. During a radio interview on Monday 5 January, Hollande also said France would not intervene until there is ‘order’ in Libya and ‘dialogue, which hasn’t even started’.

Given the experience following the Resolution 1973, which authorised a no-fly zone over Libya in 2011 and then led to a war on Gaddafi, it is unlikely that Africans will accept a UN resolution as sufficient justification if it is limited to a new military campaign. Libya may need a comprehensive, multi-functional UN peace mission of several thousand troops under a Chapter 7 authorisation with a commitment to stay in Libya for several years. Events in the next few weeks will indicate what kind of international intervention will take place and whether it will be with the full agreement of the AU.

This article was originally published here