Home / Normal / Gender and State Building in Libya: Towards a Politics of Inclusion 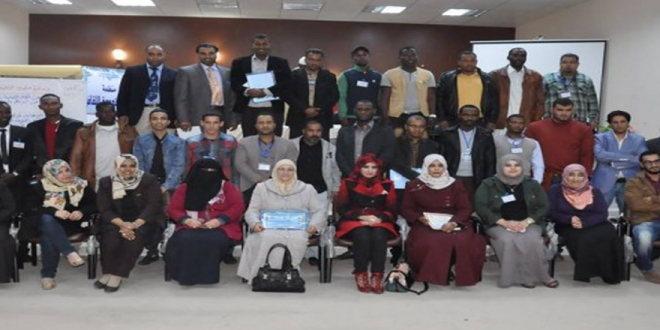 Gender and State Building in Libya: Towards a Politics of Inclusion

The Libyan Revolution marks a watershed moment in Libyan history and more specifically in the history of women’s participation in the public space. Women were at the forefront of the demonstrations as protestors, medical workers, and aid providers, as well as organizing behind-the-scenes and in the diaspora calling for political change and a just inclusive transition to democracy.

However, they have been systematically excluded from the public sphere facing intense de-politicization and silencing at a crucial moment in their national political transformation process. The Libyan revolution appears here, similar to other Arab revolutions, to present a “gender paradox.”

On one hand, women are the politically empowered agents of the Revolution and change. On the other hand, they are the victims of a new kind of political violence and exclusion. Thus there is a need to address women’s participation in the public sphere from a different approach than the usual “women’s empowerment” approach.

The suggested approach here is a more inclusive participatory integrated one of political and normative frameworks. Women’s role should not be limited to defending women’s rights issues or just their formal numerical representation in decision -making bodies. Rather they should struggle to become influential shapers of a new discourse of politics of inclusion which rests upon inclusive state-building, gender-equitable institutional reform, inclusive social transformation, demilitarization and peace building.

Post-Qaddafi Libya has been burdened with its thorny past. For four decades, Qaddafi destroyed the infrastructure as well as the moral fabric of Libyan society. Qaddafi’s tyrannical regime left behind seeds of divergence.

The lack of an institutional infrastructure has given the Libyan people a chance to rebuild their nation anew. There are important challenges, however, mostly related to the need for effective policy change and to resolving a legacy of corruption, regionalism and division from the Qaddafi period.

Women’s meaningful engagement in public space as well as in state-building emerges at the crossroads between both Qaddafi’s legacy and the current problems that have resulted from it and the promise of a new Libya. The absence of civil society under Qaddafi’s government and women’s limited political and economic influence in the past 40 years suggests that this issue requires urgent and careful support.

Societal forces, including women, seem to have positioned the participation in elections as their top priorities, which in turn has only reinforced polarization and the rise of selfish politics of dominance and exclusion though in post-conflict societies national reconciliation and the politics of inclusion should become the priority.

The country is in pressing need for civil amity and a politics of inclusion. Libyan society is torn between cultural, regional, tribal and ideological factionalism. The sense of societal brotherhood and open citizenship is eclipsed by tribal, regional and factional inclinations which were reinforced during the aftermath of Qaddafi’s rule through divisive policies.

Should reconciliation not be achieved in a timely manner, societal gaps will only widen. The quantity and quality of current initiatives that are designed to restore societal amity and politics of inclusion are insufficient.

In the meanwhile, most women activists are busy with untargeted political agendas such as calling for more formal/ quantitative representation in the National Congress, Parliamentary or the Constitutional Assembly at the expense of an agenda which places politics of inclusion and gender-equitable state building especially in the security and judicial sectors as the most urgent priority.

Gender-equitable state building or the politics of inclusion for gender, is used here as an analytical category intersecting with other categories such as ethnicity, culture, tribe, race and age.

There are key gaps to be addressed, and strategies to be prioritized. In relation to disarmament and demobilization, women activists should pose a new discourse that redefines security transforming it from offensive to defensive position and shifting it from militaristic security to human security and development focus.

Women activists should be fully engaged in demilitarization and demobilization and reintegration programming of armed revolutionaries as it is the first step in reforming the State Security Sector and has implications on the unfolding of the process of transitional justice.

Women activists would have to address sensitive issues like providing impunity for fighters and reintegration packages while balancing it with injustice felt by civilians and victims who have no benefits.

In terms of reintegration, a sensitive issue they have to address is the sense of injustice among fighters – mid/lower level ranks sense of injustice after war – not benefiting from new positions as leadership does; not receiving/realizing life quality they had come to expect.

In terms of impunity, there will be negotiations with fighters on not being subjected to Transitional Justice processes. Women activists working in communities taking on reintegration programs, have to be attentive to women victims of violence (especially sexual violence) who are neglected and not offered support or reparations.

Women activists should be more engaged in mediation and negotiations between the government and armed revolutionaries creating a platform where a consensus is built on issues like integration of armed revolutionaries in the State Security Sector and other State apparatuses so as to encourage them to submit their arms.

Moreover, more media campaigns need to be designed and launched against the proliferation of arms and against armed manifestations.

It is about acceptance of difference and diversity in terms of culture, religious sects and ideology. It is a process manifesting a whole culture of peace which in turn cannot be based on the continuation of injustices i.e. of impunity for peace basically means maintaining harmony and equilibrium.

This should be made clear from the beginning of the process in order to gain the trust of the people. The dialogue should be inclusive of all the ethnic, tribal and regional groups.

The objective of the dialogue should be laying the foundations of order in the country. Being multi-level means that a dialogue should be held between the representatives of political stakeholders, youth, traditional tribal leaders, and local councils.

The international community should play an important role in this process of the national dialogue. It should announce its commitment and support in terms of expertise and logistics to safeguard an inclusive sustainable national dialogue process.

The exaggerated focus put on elections should be brought to a reasonable level and simultaneously a focus on the realization of reconciliation and restoration of social amity should be built. By this I mean that elections are a means to reconciliation, and not an end in itself, as many seem to believe.

Elections do not automatically generate public tranquillity, understanding, or tolerance. If focus is placed only on elections without being devoted to social amity, elections may lead to sharper polarization. A stress should be also made by women activists in introducing a politics of inclusion in state building and reforming institutions.

In relation to discourse, the centrality and relevance of religious values in shaping Libya’s socio-political present and future should be utilized. Women activists should engage moderate and reformist religious discourse and should not alienate religious values or those who espouse them so as to win credibility and legitimacy.

Women activists should be invited to transcend and avoid ideological dichotomization. The debate should be oriented towards an inclusive participatoryicic democratic discourse and uphold Islamic ethical values, thus geared towards development issues such as human development, capacity building of youth and local development of suburbs.

In inviting women to be more inclusive and collaborative, their discourse should address the whole nation. They should be working on proposing national projects such as disarmament, national reconciliation and peace building.

The conclusions reached in the direction towards an inclusive politics of gender state building are thus: Having recently emerged from a historic revolution, Libya remains in a fragile post-conflict transitional period with its share of opportunities but also serious political and security challenges with special ramifications on women’s participation in public sphere.

It is more evident today that the “democratic tool kit” for political transition is questionable. At this stage, elections, multiparty system, free media and drafting the constitution are likely to be a recipe for disappointment, if not failure for they have been a recipe for polarization and hence destabilization.

Today there is a sense of scepticism, and even renunciation with which the Libyan people perceive the blue print of the process of democratization. However, this should not be mistaken for a loss of faith in national unity, democracy and the rule of law. Libyans are still committed to the principles of which they have fought for, dignity, justice and freedom.

The Libyan experience, however, has demonstrated the failure of the dogmatic approach of applying democratic tools in post conflict transitions. Libya manifests the need of post conflict societies to the urgency of an inclusive dialogue and consensus-building on national priorities during the transition period as well as regarding guiding principles, norms of governance and institutional reforms.

Nevertheless, amidst this increased level of fragmentation and lack of security and stability, there are groups that display an encouraging level of coherence and consistency, both in their objectives and their messages.

First among these are Libyan women and educated youth activists, who continue to express a greater recognition of and commitment to human rights and inclusive transitions and their ability to play a defining role in peace building and bringing Libya back to stability and inclusive reform.

What had been formerly perceived as the most stagnant part of the world is currently undergoing a succession of radical changes. Libya as part of the Arab world is effectively developing its own new paradigms; a reality that is both a challenge and an opportunity. The greatest challenge at the moment in the Libya is the absence of the rule of law and effective inclusive systems of governance.

Women as part of the marginalized and excluded groups in society suffer most in times of turmoil and absence of law. Thus, there is a need reform the whole system. Therefore, the greatest opportunity here is that of the paradigmatic shift from the ‘women’s empowerment’ approach to a more inclusive participatory integrated one of political and normative frameworks.

In conclusion, safeguarding an inclusive participatory, gender equitable institutional reform and state building is safeguarding women’s public participation. Thus it is high time women move from calling for numerical representation in the already existing political systems to shaping of a new discourse on the politics of inclusion with new values of governance.