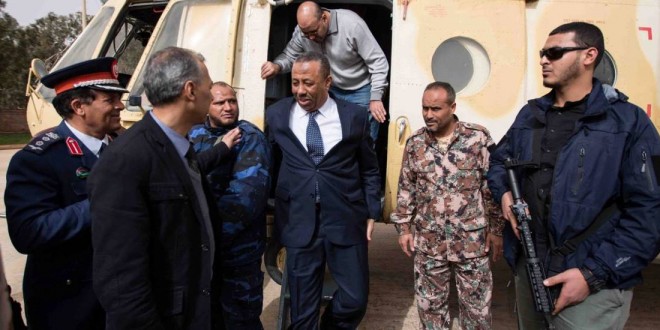 Minister of Interior Omar Al-Sinki is still suspended from his duties and is under investigation by the House of Representatives National Security Committee, contrary to media reports of his reinstatement.

The Committee reported that it had commenced its investigation of the Minister Thursday, LANA reports, after he was referred to it by Prime Minister Abdullah Thinni.

It also assured that Prime Minister Thinni had not in fact reversed his decision to dismiss Sinki despite the Interior Minister presenting a letter of protest to the PM. The Prime Minister, in turn, had referred the matter to the HoR, the Committee revealed.

The National Security Committee said that it will issue a report and present it to the HoR which will decide whether Minister Sinki will continue in his job or be dismissed.

It will be recalled that Prime Minister Thinni had reportedly dismissed Sinki on Monday, four days after Sinki had given a controversial interview on 4 February to Le Monde when he was in Paris for talks with the French government.

In the interview, Sinki had accused General Khalifa Hafter of being a dictator and called for UNSMIL’s dialogue to be held in Misrata, his home town.

There are also reports that Sinki’s ouster followed a meeting Tuesday in Beida between Thinni and HoR president Ageela Saleh which may also have been attended by Hafter.

Meanwhile, Sinki had refused to accept Thinni’s dismissal.In a statement posted Thursday on his Ministry of Interior’s Facebook page Sinki had said that only the HoR had the authority to sack him and held Thinni responsible for the consequences of his sacking.

‘’I am surprised by the legally void procedure taken by Prime Minister Abdullah Thinni in commissioning another officer to run the Ministry’’, Sinki had said. ‘’The fact is, the procedure is null and has no legal value. The suspension from work and dismissal (of a Minister) is the jurisdiction of the House of Representatives’’, he had added.

‘’I would like to report that I am still carrying out my duties and that I have submitted a memorandum to the President of the HoR and the Prime Minister with regards to the dismissal’’, he had assured, indicating that he had no intention of accepting his dismissal.

‘’I call on the Prime Minister to address the effects of his decision on an urgent basis and I hold him legally and historical responsible for the outcomes from this decision and its result on the Libyan people’’, Sinki had concluded.