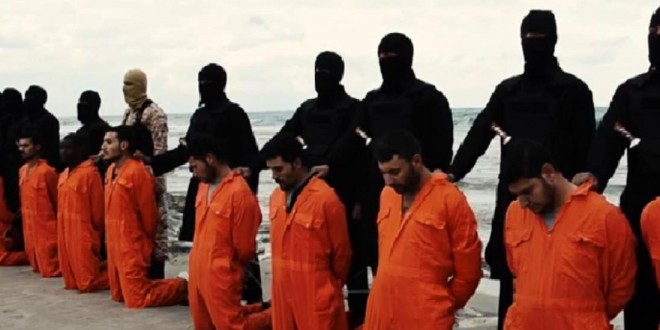 A videotape posted online showed gunmen from the radical group implementing the death sentence against 21 Egyptian Copts, who were abducted last week in Libya.

In their first military appearance in the Libyan province of Barca, the IS extremists performed a huge military parade with the people’s announcement of allegiance to the so-called Caliph, Abu Bakr al-Baghdadi (IS leader).

Pro-IS websites published pictures of the parade organized in the Libyan province of Barca, where residents reportedly swore allegiance to the Islamic State’s leader.

In the meantime, the U.S. former Minister of Defense, Leon Panetta, said in an earlier statement that the anti-IS war may take 30 years.

“The Islamic State will extend to countries like Somalia, Yemen, Nigeria, and Libya, taking advantage of the chaos and the absence of governmental authorities in these countries,” Panetta added.

Earlier reports had indicated that about five-hundred IS militants are based in Derna in northeastern Libya, and receive military training in camps.