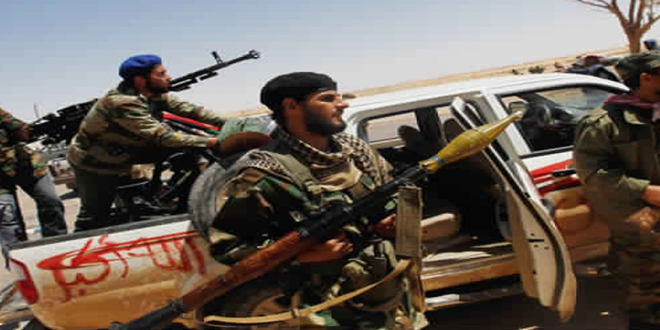 French President Francois Hollande urged Libya’s warring factions on Tuesday to agree on a political deal that will restore a functioning central government, legislature, and banking system and put an end to human trafficking.

“The first necessity here is for various factions to strike a political deal between various factions so that there can be a government, a parliament and central bank – and only one, if possible, at each level,” Hollande said in a joint press conference with Italian Prime Minister Matteo Renzi.

France and Italy have called for a United Nations Security Council meeting on the security situation in Libya.

Hollande also expressed his support for Italy’s U.N. efforts to end the “chaos” in Libya, where growing activity of Islamist militants groups has sparked international concern, especially in countries of southern Europe.

Egypt, however, said on Tuesday that a political accord in Libya would not be enough to tackle the jihadist threat in the country, after Western countries rejected an Egyptian proposal for military intervention in Libya.

Foreign Minister Sameh Shoukry’s comment came a day after the internationally recognized parliament in east Libya announced a suspension of its participation in U.N.-brokered negotiations between Libya’s warring rival administrations.

It dropped the request faced with Western reluctance to military intervention in Libya, where Islamist militias in control of Tripoli are battling forces loyal to the internationally recognised government, also based in the country’s east.

Shoukry said Egypt supported the negotiations but they were not enough.

“The approach by several countries, which imagine an accord between politicians will deal with the effects of terrorism, is astonishing,” he told a press conference in Cairo.

Shoukry suggested that countries of the U.S.-led coalition against ISIS in Iraq and Syria were inconsistent when it came to Libya, which borders Egypt.

“Do the Libyan people not deserve the same support as the measures undertaken by the coalition in (Iraq and Syria)?” he added.

The minister renewed Egyptian calls for support of the internationally recognized government, which is under an arms embargo like its Islamist opponents.

“You are intervening in a serious way against an organization in one place and completely ignoring them in another,” he said of the coalition air strikes on ISIS in Iraq and Syria.

The United States on Monday renewed its call for dialogue, warning of the high stakes at play.

The international community faces a daunting task to find a political solution to the lawless nation’s political and military crisis.

Libya plunged into chaos after the 2011 NATO-backed revolution that toppled and killed Muammar Qaddafi, with heavily armed rival militias that had fought the longtime dictator’s forces rising to prominence.