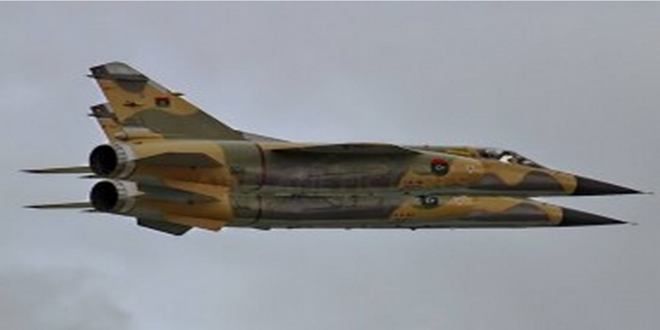 Even as the Islamic State of Iraq and Syria (ISIS) rises further in Libya, looming ever closer to Southern Europe, there is a widening arms race to supply the various sides – Tripoli aka Libya Dawn and Tobruk aka Libya Dignity – from various corners of the region.

The suppliers, who seem to be ignoring the U.N. arms embargo, are actively trying to get around the embargo’s regulations in one form or another.

One Libyan-based NGO worker commented that “Everyone seems to bypass the arms embargo and no one is respecting it.”
The situation is complex and needs to be simplified to understand all aspects clearly.

The U.N. embargo on Libya, as implemented by UNSC resolution 2174, specifically determines that any party that wishes to supply arms to Libya can only do so if it is to the “recognized authorities” – which rules out Libya Dawn – and if they have received approval from the Sanctions Committee which must be notified of any arms transfers in advance.

Clearly this fact means that Tobruk can move forward on weapon requirements while Tripoli cannot.

This is why the U.N., the United Kingdom, and the United States all want a unity government formed before the arms embargo is lifted. The “love-fest” that these three have with Tripoli’s General National Conference (GNC) while ignoring the legitimate demands of the internationally recognized Tobruk’s House of Representatives (HOR) is stomach-turning.

Tobruk Prime Minister Abdullah Al Thinni is so upset he has pulled his government out of any Western-led talks for now.

Interestingly, Tripoli appears to be asking Ukraine for weapons help in the meantime. Throughout February 2015, the head of the Islamist Libya Dawn group, Abdurrahman Sewehli, along with other Tripoli officials, travelled to Kiev to discuss their requirements.

Apparently, Sewehli made the trip to Ukraine in order to “acquire arms and munitions from Ukraine for Tripoli that would convert two Soviet-era MiG 23 aircrafts into fully-functional fighter jets.”

A Serbian analyst told me that Tripoli is also actively looking for more small arms which is ironic given that the GNC and its allies are overflowing with these weapons.

So what exactly is Tripoli searching for in Kiev and perhaps in Belgrade? It is likely that Tripoli, with the backing of the West, is trying to find the “Moderate Muslim” to deal with in the GNC and Libya Dawn.

But there is more to the geopolitical alignments that is intriguing and shows emerging divisions.

Simultaneously, Tobruk is reaching out to Moscow. Tobruk’s Foreign Minister Mohamed Abdelaziz met with the Russian government in February 2015. Other Tobruk emissaries are also travelling to Russia too during the last month.

Importantly, Abdelaziz stated “We hope that this [military] cooperation will continue in two main areas: in the field of education and training of Libyan national [military] personnel and the provision of modern weapons to Libya.”

The timing of Tobruk’s legitimate search for help is seen in Russian President Vladimir Putin’s visit to Egypt almost a month ago. The Libyan Army’s Chief of Staff was in Cairo for the meetings between the Kremlin and Egyptian President Adel Fattah El-Sisi.

An Arab official told me that the linkages between Russia and Egypt in military equipment and intelligence, made all the more important by the presence of Russian Foreign Intelligence Service (SVR) chief Mikhail Fradkov and his colleagues over the past year, is robust and that this assistance is being fed and is intended to help Tobruk is undeniable.

Let’s recall the weapons list that Russia has planned to provideto Cairo from November 2013:

This equipment is perfectly suited for Egypt’s strategic and tactical plans in unity with the Tobruk government and Operation.

Dignity led by General Khalifa Haftar against the ISIS and Libya Dawn in Libya and specifically Cairo’s requirements in the Sinai against the ISIS’ Vilayet led by Ansar Bait al-Maqdis.

Egypt’s $5.9 billion announced purchase of 24 French Rafale fighter jets and a frigate is also illustrative of what is becoming a Franco-Russian support network for Cairo and Tobruk.

That Ukrainian President Poroshenko visited IDEX 2015 suddenly set off alarm bells and speculation about the connection between Tripoli and Kiev.

The Ukrainian leader said he had signed a number of agreements, some quite logical, while other discussions focused on a possible realignment of the Slavic Balkan states to help Kiev against Russia.

Arab and Russian officials told me a geopolitical shift of epic proportions is occurring with the intertwining of the Syrian situation with Libya along with the standoff between Ukraine and Russia.

To be sure, Ukraine and Serbia want to chop off the head of ISIS in the Balkans in “the Wahhabi stronghold” of Gornya Maocha in Bosnia which is known as a transit point for ISIS fighters to the Levant but also perhaps to ISIS in Libya.

From a Gulf perspective, both Kiev and Belgrade are on the front-lines of the ISIS in southeastern Europe. With the United States and other European states holding back on lethal assistance to Kiev against Russia, there is a real possibility that these Slavic states are being asked to box in Bosnia before the Libya maelstrom blows back on them. Even Macedonia can be seen as part of this Kiev-Belgrade axis.

Don’t laugh. Russia already signed a deal with Greek Cyprus, within the spirit of Orthodoxy if you will, for access to two naval facilities for counter-terrorism and counter-piracy operations in the Mediterranean.

Greek Cypriot President Nicos President Anastasiades also revealed that the two countries were discussing the possibility of Russia using an air base on Cyprus for humanitarian relief missions.

The Kremlin is deeply interested in securing the Mediterranean littoral along with France and Italy and helping the government in Tobruk. This is why Tobruk desperately wants airlift and maritime security assets to patrol and deliver humanitarian aid in their broken country.

Clearly, the Libyan situation is complicating a number of other strategic situations that are edging towards an escalation ladder and bringing into sharp relief geopolitical alignments.

All sides need to be careful. The new Thirty Year War, being fought on three fronts, is taking shape dangerously. Full awareness of these trans-regional trend lines by policymakers and stakeholders is paramount.

_____________________
By Dr. Theodore Karasik, a Gulf-based analyst of regional geo-political affairs. He received his Ph.D in History from UCLA in Los Angeles, California in four fields: Middle East, Russia, Caucasus, and a specialized sub-field in Cultural Anthropology focusing on tribes and clans.