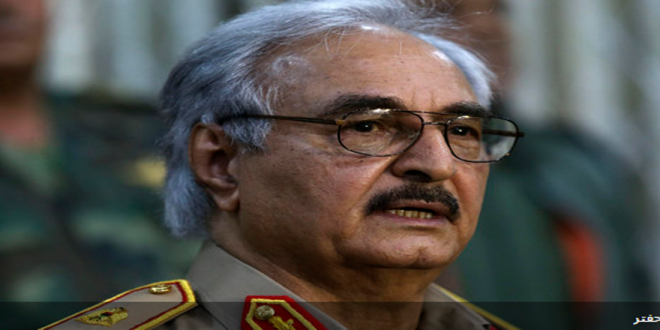 Disputes emerge between Tobruk parliament ministers after general confirmed as leader of government forces, with reports that defence minister threatened to resign.

A Libyan source in the Tobruk government, headed by Abdullah al-Thani, have told al-Araby al-Jadeed that sharp disputes erupted in the government’s ranks following the appointment of Khalifa Haftar as army chief.

The claims follows reports of a tentative agreement reached on Saturday by the parties to the Libyan conflict to form a “consensus” government.

The source, who asked not to be named, said: “The Tobruk parliament’s decision to appoint Haftar as general commander of the army sparked sharp differences.

“The defence minister in the Tobruk government, Massoud Rhouma, threatened to resign during a recent meeting with the [pro-Haftar] parliament speaker Akila Saleh Issa and Thani.”

The source said the defence minister sees the move as undermining his own powers.

The source said Egyptian and Emirati officials intervened to stop Rhouma from resigning, and promised to help establish the scope of work for each official, including Haftar and the army chief of staff.

Previously, the commander of the air force, Saqr Geroushi, had threatened to bomb the parliament in Tobruk should Haftar’s appointment go through.

Meanwhile, Thani has received promises from Sudan to end support for what they called armed militias in Libya, including arms shipments across the joint border.

If true, this Sudanese pledge would follow a recent visit by Sudanese president, Omar al-Bashir, to the UAE, where it was reported that he received pledges of financial supprot for Sudan in return for cutting ties to his Islamist allies.

In the meantime, negotiations are under way as part of the UN-sponsored Libyan national dialogue in Morocco. The purpose of the talks is to reach a final settlement regarding the form of the consensus government.

On Saturday, the Anadolu news agency quoted an unnamed member of the Libya Dawn-backed, Islamist-led Tripoli government as saying that a written agreement was proposed regarding the criteria for choosing the head of a united government, its form, its term, and its jurisdictions, in addition to the number of portfolios in the cabinet.

The Tobruk and Tripoli delegations will now return to their superiors to consult over the candidates, before returning to Morocco on Wednesday to discuss the names and agree which legislative authority would give the consensus government a vote of confidence.

The Tripoli member said his delegation was feeling optimistic about the dialogue.