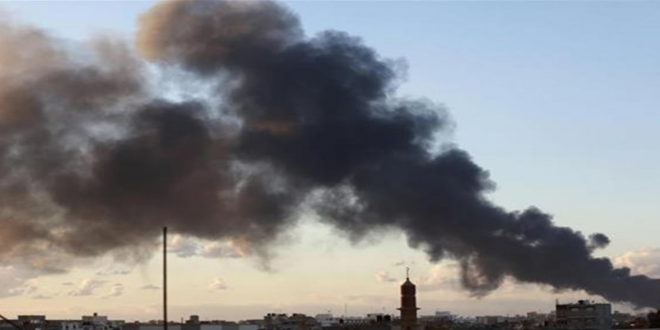 In a cafe located on the main street of Bayda city, some 1,200 kilometers [746 miles] east of the Libyan capital, Abdullah sat alone in a corner. Sipping on his coffee, he was lost in thought about the fate of his family and relatives in Derna, the main stronghold of the Islamic State (IS) and the city that extremists aim to pronounce as the capital of their emirate.

Despite a state of anticipation and caution following bloody suicide bombings mounted by IS in adjacent Quba city as a response to the Egyptian raids, the normal pace of life has returned to Bayda. Bayda is the fourth-largest city in Libya, with a population estimated at more than 200,000. Army and armed civilians have been deployed to strategic positions and have set up checkpoints to prevent the infiltration of suicide bombers from Derna into their city, which is home to the legitimate government formed by the internationally recognized and elected parliament in Tobruk.

The fear of fresh bombings and other attempts to instill insecurity were further reinforced by the discovery of a car filled with explosives in front of Bayda Hospital. The residents of Bayda fought ferociously to oust the regime of Moammar Gadhafi. Since the middle of last year, they have joined fighters from Quba, Marj and Tobruk — part of the main force on which Khalifa Hifter relied to fend off Ansar al-Sharia and the extremist Libya Shield faction in Benghazi.

Abdullah, the trader who recently moved from Derna, despite his pensive nature appeared happy to be able to do the small things that have become forbidden in his extremist-dominated homeland where Sharia is strictly implemented. He can now shave, smoke cigarettes one after the other and express his political opinion without fear of being whipped or killed.

A few weeks ago, Abdullah and his wife and kids fled to the city that strongly opposes the Islamists and supports their archenemy, Hifter. Backed by tribal chieftains in the east of Libya, Hifter has been mounting offensives against extremist militias in Benghazi after it fell under their control. He promised to eliminate them in a battle he called “Karama,” or dignity.

Like Abdullah, thousands of Libyans from different cities have come to Bayda, which was among the first to revolt against Gadhafi and has become, since last summer, the interim capital of the internationally recognized government. This came to pass after the Libya Dawn forces, who are affiliated with the extremist tribal alliance, tightened their grip on Tripoli following fierce battles with the Zintan Brigades, which are affiliated with the liberal national forces alliance led by Mahmoud Jibril.

The hotels of Bayda accommodate a surplus of employees and officials whose accommodations are paid for by the interim government while they work on pumping new blood into the collapsed and divided state — a state run by two governments and two parliaments, one located in the far east of the country and one in Tripoli.

Advisers of Prime Minister Abdullah al-Thinni aspire to build alternative mechanisms for governmental affairs in Tripoli, which is ruled by a competing government formed by the General National Congress, whose term has ended.

The government of Omar al-Hasi was formed after militias affiliated with Libya Dawn forced the internationally recognized government out of Tripoli. The UN, European Union, Arab League and the African Union consider the government of Thinni — formed by the elected parliament of Tobruk — the only legitimate executive authority in Libya.

Officials in the Bayda government work in the offices of some ministers and governmental sectors. Thinni’s government has control over fewer cities and districts than the government of Tripoli, whose influence includes the west of Libya except for Zintan and Rajaban, in addition to central Libya and the sprawling deserts of the south such as Sabha.

Thinni reiterates, however, that supporting forces are located in al-Aziziyah, adjacent to Tripoli, and that the government has control over the military base of Watba and the strategic area of Bir al-Ghanam. He also affirms that regaining control over the capital is possible if the UN Security Council lifts the ban on selling arms to Libya.

On several occasions, Thinni has called on the international community to provide his forces with arms and ammunition to prevent Libya from entering a full-fledged civil war, and to fight terrorism and the threat of extremist Islamist groups who want to move the battlefront to the area off the Mediterranean basin.

Thinni’s advisers accuse the West of working to enable the Muslim Brotherhood and political Islam in Libya. One of his senior advisers told Al-Hayat: “They monitor the supplies of arms and ammunition from Turkey and Qatar to the Libya Dawn forces, allied with al-Qaeda and IS, while they threaten to use the veto power against a decision that will allow us to defend ourselves, our families and our dignity.”

Secular elites in eastern Libya are also critical of the double standards of the West when dealing with Arab affairs. According to a professor at Benghazi University, whose office was set on fire by Ansar al-Sharia forces, “While IS is being fought in Iraq and Syria, the West turns a blind eye to its crimes in Libya and supports political Islam, the same umbrella under which IS was founded.” The university was shut down due to bloody fighting in the city, which has been ongoing as part of the worst violence witnessed in Libya since the ousting of Gadhafi.

The interim government admitted, however, that Islamist extremists have their hands on oil fields in the west of the country and on an oil field near Sirte, in addition to four or five oil export ports.

Thinni’s government uses a small airport located around 18 kilometers [11 miles] away from Bayda city in the adjacent village of Abraq to link between the pro-government cities in a country divided by political, military and tribal entities competing over the large oil and gas resources.

From the besieged city of Derna, Islamist extremists infiltrate the forests of Ras al-Hilal and launch heat-seeking rockets and artillery shells to halt air navigation at the airport, which is the main air-escape route for Libyans trying to leave the country.

Only four countries have agreed to receive flights from the airport: Egypt, Tunisia, Jordan and Turkey. The flights are operated by two Libyan airlines, while international airlines have canceled all flights into Libya — a country that has been wracked by chaos and bloody fighting for four years.