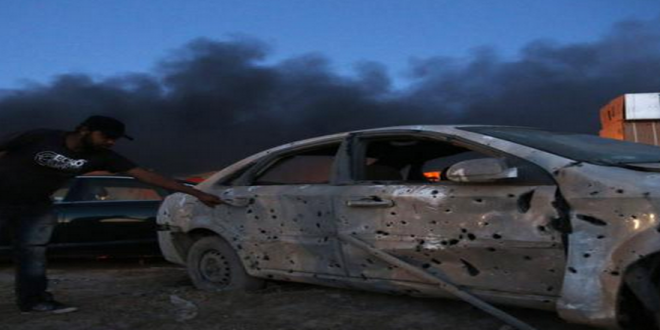 IS attack kills 5 militia fighters in Libya city of Sirte

Militants with the Islamic State group killed five Islamist-backed militia fighters in an attack on a checkpoint Wednesday in the Libyan coastal city of Sirte, a local official said.

The militia fighters are part of the so-called Brigade 166 tasked by the Islamist-backed Tripoli government with securing Sirte.

They have engaged in sporadic fighting with IS jihadists around the city, the home town of slain dictator Moamer Gathafi, whose regime was toppled in a 2011 NATO-backed revolt.

In an audio message posted online IS meanwhile claimed responsibility for a double suicide car bombing that killed at least seven soldiers in Libya’s second city of Benghazi on Tuesday.

Last week at least 12 Libya Dawn militiamen were killed in clashes with IS jihadists near Sirte.

Libya has been plagued by chaos since the end of the 2011 revolt that toppled Gathafi, with heavily armed militias battling for control of its cities and oil wealth and rival governments and parliaments vying for power.

The country has had two governments and parliaments since Tripoli was seized in August by Libya Dawn and the internationally recognised government fled to the country’s far east.

Sirte, 450 kilometres (280 miles) east of Tripoli, has been a bastion of Islamic extremism, with rival groups positioned in the Mediterranean city.