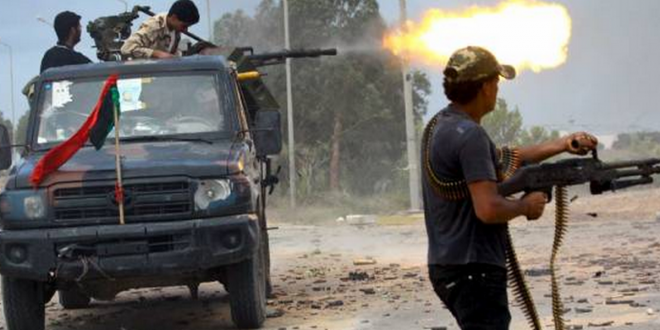 Libyan army pushes towards Tripoli ahead of next round of talks

Clashes have intensified outside Tripoli as Libyan National Army (LNA) forces claim to have taken control of a strategic town, and Libya Dawn prepares to defend the capital from attack.

After two days of fierce fighting around the town of Al-Aziziya – 30 kilometres south-west of Tripoli – the LNA, loyal to the Western-recognised government based in Libya’s east, claimed to have full control of the town.

“The plan is now to secure Aziziya and the surrounding area of Wershafana, so that local people can return,” said Commander of LNA operations in Western Libya, Colonel Idris Madi.

The town’s proximity to the capital threatens the Tripoli-based government, brought to power last year by the Libya Dawn movement which took over the city in August. It fiercely denied the LNA claims, insisting it has retained control of the town.

“Aziziya is 100 percent under our control. There are barracks on the outskirts of the town where about 60 rebels occupy one corner,” Taha Shakshuki, a member of the Tripoli Crisis Committee, told Middle East Eye. “We don’t want to kill them so we have given orders to our troops to let them go, as long as they first surrender their heavy weapons.”

Shakshuki claimed that the LNA are now using French-manufactured, high-tech guided missiles, the accuracy of which intimidated the Libya Dawn forces – mainly manning Soviet-era weaponry stockpiled by the former regime.

Eyewitnesses from the ground, however, tell a slightly different story. One Libya Dawn fighter, speaking on condition of anonymity, admitted that Tripoli government forces now held control only to a checkpoint outside Aziziya, confirming that the LNA were inside the town.

A night of heavy fighting saw neither side make any progress, he said, but throughout Saturday night, Libya Dawn forces readied to defend the capital, setting up heavily-armed checkpoints along roads leading to Tripoli.

The timing of the Aziziya takeover is being seen by some analysts as an attempt to give the country’s Western-recognised institutions greater bargaining powers within the UN-sponsored dialogue, which aims at forming a National Unity Government in Libya.

“The LNA want to gain more ground before any deals are reached, and Tripoli is the most important bargaining chip,” one Libyan journalist, who preferred to remain anonymous, explained. “Even in the 2011 Revolution, Qaddafi held onto the capital as long as possible, and it was Tripoli that the rebels really wanted. Whoever controls the capital effectively has Libya.”

The next round of dialogue is expected to take place this week, either in Algeria or Morocco, with discussions focussing on the formation of a National Unity Government in an attempt to bring stability to the country.

At the end of the last round of talks in late March, UN Special Representative of the Secretary-General Bernardino Leon said that all participants were convinced that there would be a political solution and a national agreement in Libya.

On paper, this appears to be progressing. Abu Baker Bayra, the head of the Dialogue Committee for the House of Representatives – the eastern-based Western-recognised parliament – announced discussions on proposed names for a National Unity Government would take place on Monday, before the next round of talks.

Meanwhile, however, the fighting between the rival sides continues. Despite the UN’s insistence that participants in the Libyan Dialogue agree that fighting should stop, this has yet to have any meaningful impact on the ground, apart from the withdrawal of Libya Dawn forces from the battle to control the country’s largest oil ports.

The Tripoli-based government’s military reach has been increasingly limited to one of defence, especially with a new frontline opened up against Islamic State (IS) militants in and around the town of Sirte, 450 kilometres from Tripoli. Six people were killed on Sunday morning in a suicide attack claimed by IS on the outskirts of Misrata, the city from where many of Libya Dawn’s fighters originate.

The loss of the town of Aziziya has struck a further blow to Libya Dawn’s beleaguered western front lines, already at a deadlock for months, and it has responded by calling on local people to join its ranks.

Fighters from Tripoli and Misrata were summoned on Saturday night to help secure the capital, and young people in the western town of Zawia have been urged to fight against LNA forces in the local area. “I heard a sheikh speaking on the local radio, instructing young men to go to the front lines in Western Libya. He told them anyone who dies there would go straight to heaven,” said one Zawia resident, who declined, as many Libyans now do, to give his name out of fear for his safety.

The radio station, he said, is increasingly being used to spread this kind of propaganda and, as a result, several presenters have resigned.

A secondary school teacher, who also preferred to remain anonymous, described how groups of Libya Dawn fighters had visited one school in Zawia and threatened to close it. “They told young male pupils that school certificates were nothing compared to the certificate gained from fighting on the front lines, which would be a certificate for heaven,” she said. “Although many local families think this is a baseless war and forbid their children to go, we have seen some boys as young as 16 years old leave to join the fight.”

A spokesperson for the Tripoli-based government insisted that young people in Zawia and the mountain town of Ghariyan had volunteered to join. Shakshuki said that they did so in spite of salary delays that meant most Libya Dawn fighters had not been paid for up to three months.